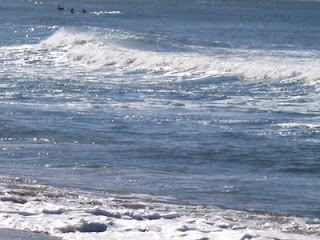 My Dad taught us to love the ocean. He would go out into the surf and swim like a dolphin. Dad could float on his back like an otter. We would build sandcastles with moats. We'd dig big holes to China. Dad used to teach us, "Never turn your back on the ocean"...

One day I was not paying attention and almost lost my breath, as a big, cold, wave hit me from behind. I was so thin as a child, it was difficult to get up on my feet. Dad rushed to my aid and brought me back on dry sand. 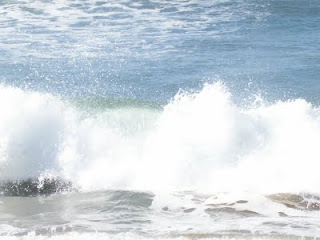 It wasn't his style to call me out in front of my family and yell at me for not paying attention. Dad had respect for our individual dignity. The last thing I wanted to do, was disappoint him. It was just easier to confess, to admit I had not listened and turned my back to the ocean.

Dad lead by example and was good at forgiveness. Even today, when I go to the beach, I can hear his voice. The beach takes me back to my childhood and rejuvenates me.

I remember one family expedition to the beach... Dad drove us all down to the beach in our family car, a black VW bug. My brothers could tell you what year the bug was, but it was before seat belts. Mom and Dad in the front, my two brothers, my sister and myself in the back, with the two youngest brothers in the
little pocket in the very back. 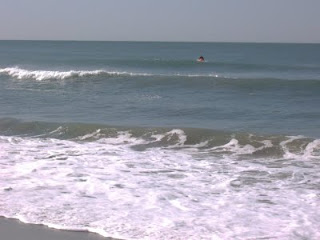 We used to make people stop and stare at church
when we would pile 8 people out of that VW bug.
I never understood why Mom wasted her time
ironing our clothes, when we would pack ourselves
like sardines into that car!
It would be a typical, hot, sweaty, summer and Dad would drive up and down the parking lot looking for a parking place. We rode down to the beach in our suits because it was so dang hot. We would all yell and point to open spots to park the car... but, Dad would drive right by... It was always a mystery why he would be so particular about where he parked.
Or maybe he knew if he kept us good and toasty in the car, when we finally got out on open sand, we would be so happy and have so much more fun. The brothers loved to bury us in the sand and stick our flip flops in the hump of sand covering our bodies, where our stomachs were, making us look much shorter. We thought that was hilarious!!
I called the nursing home today to try to talk with Dad, but it was one of those days where he was getting his meds, taking a shower, or asleep. I didn't get to talk with him. I found out from the social worker Dad's bifocals finally came in, and she had given them to Dad this past Tuesday. Neither Mom nor my youngest brother mentioned Dad wearing his glasses, so I wanted to check if Dad, still had them. When I called later tonight, I reached one of my favorite male nurses for Dad. He was kind enough to go check, returning to tell me Dad's glasses were on his bed stand and he was asleep.
The nurse and I chatted for awhile. He told me Dad seems stronger and is walking more. He told me he had seen Dad earlier, walking in the halls singing...
Posted by Donna B. at 9:49 PM