My second to the youngest brother and my sister went to visit Dad yesterday.  They found him in his room, asleep in his wheel chair.  Apparently, the nurses had placed him in his room for privacy because they were going to check his blood sugar.  My sister reported it was 157.

I went to sleep early last night and did not read her email until today.  When I first read the email, I thought it read, "checked his blood pressure".  Reading it again today, I realized what it said and became concerned.  Why would they be checking Dad's blood sugar?  He is not a diabetic....

I called the nursing home and spoke with the charge nurse.  She confirmed it was me, then she verified Dad was listed as a diabetic on his chart!  How did this happen and neither Mom nor I knew about this?  Mom was as shocked as I was. Nothing was said about this in February, at his last Care Conference. Mom told me the last time Dad was in hospital, in January, one of the doctors in the ER had asked her if Dad was diabetic, and she told him NO.

This is a prime example why I don't like the "new chart" each time he comes back from the hospital.  I sent an email to Dad's primary care physician.  If I don't hear from him by tomorrow, I will call his office.  When I spoke with the nurse, she said the doctor  wanted him monitored regularly before and after meals and had him on sliding scale..."0-200 no insulin, 201-250 insulin".  I am blown away to know he has been given a couple shots of insulin!

I mean, I AM THE ONE THEY ARE SUPPOSE TO CALL WITH ANY CHANGES!!!  And....(get this), my sister said the note (to call me first) was back above his bed! Remember just a couple days ago, the nurse told me they had to take it down???

After his blood test, they put his red cap on his head to protect him from the sun and wheeled Dad out to the patio for some dominoes.  Dad did remarkably well, having no problems matching the dots.  In fact, he won most of the games.  My sister trimmed his nails in between games... 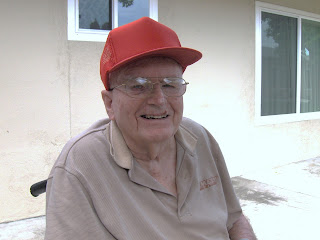 I had been having trouble reaching Dad.  There is some new nurse who, for all intent and purposes, lies to me...always with an excuse as to why I can't talk with Dad.  She told me Dad was eating, when in fact he was being bathed.  (As you can tell, I am not too happy with the nursing home right now...).  My sister knew I had been trying to reach Dad, so she called me so I could talk with Dad.  It was a brief conversation, but I could hear how happy he was being with my brother and sister.  I could tell he was anxious to visit with them... 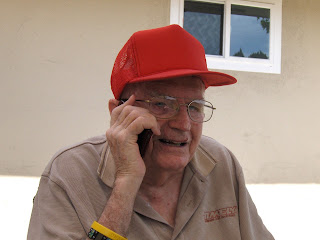 Dad talking with me on my sister's cell...
Dad did tell me he wanted me to come visit or he would come see me...He also told my sister and brother he did not want them to leave when lunch was served... It is always tough, when he doesn't want us to leave... 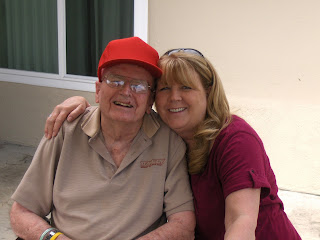 Dad and my sister Holly
They wheeled him back into the lunch room and set him with a table full of ladies.  Dad told them he would play "footsies" with them under the table... They had a good chuckle and kissed him good bye.

Basically, they had a good visit.  Dad told them how happy he was and what good care they give him...

I am at a total loss for words.  I just cannot believe this shocking news of Dad being diabetic and me not knowing! I will get to the bottom of this.  I want a date when this diabetic diagnosis was placed on his chart.  I want some answers, and I WILL GET THEM!!
Posted by Donna B. at 11:17 PM

Ugh. Some time ago my brother almost died of pancreatitus. He was in a hospital as a John Doe for a week before I found out that he was there. During the time that he was a John Doer he got almost no care at all. Once I showed up at the hospital I had to fight tooth and nail to improve his care but even when I was there every day care varied massively.

Gosh, I can see the likeness between you and your sister! As you say, it is very weird that they are suddenly checking your dad's blood sugar levels and have actually given him a shot of insulin! That's something you have to clarify pretty quickly.There's a lot of worrying there, isn't there Donna. I don't envy you. Don't forget to take care of YOU!

Donna,
I can empathise, and all I can say is the right hand doesn't know what the left hand does in nursing homes and because there is such a high staff turnover, it is best to drop in unexpectedly and frequently. We learned that the squeaky wheel gets the grease.

Grrrr! That's a pretty big thing to let go. I would be upset too!
We have a policy to notify family with any change of condition - if some vomits, gets a cold, has any new orders... we call the #1 person for that resident. It seems they should have something similar.

I'm sure you were shocked, Donna. That seems like something you should have been told right away.
As for the nurse who lies to you....?????
I hope you get some answers soon.

Your sister looks a lot like you, Donna!! That is awful to hear about the diagnosis of diabetes like this!! I know you will get to the bottom of this. I hope your dad is tolerating the shots okay (which makes me wonder why they went to shots right away instead of trying oral meds, but what do I know???)

the visit though did sound nice and its cool that he enjoys playing dominos!

let us know what you find out when you can!!

I hope you're able to get satisfactory answers sooner rather than later.

Your dad looks happy in the photos, that's great. It sure does not feel good when they don't want you to leave.

I’m thinking of you. I do hope that you are taking good care of yourself.

Have a great Weekend!

Oh dear, thinking of you at this difficult time.