Dad Entertained The Room With His Piano Playing.....(on the table...)

Mom and my sister went to visit Dad today. He was sitting in the dining room at a table.  He was over joyed to see them!  They wheeled him outside, found some shade on the patio, where he grinned ear to ear... 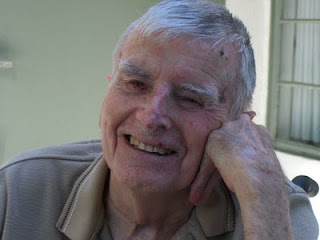 Dad closed his eyes and
talked their ears off for a half hour.
He belly laughed several times
as he told them about his dreams in vivid detail...
My sister asked how his feet were,
and of course, he told her,
"my feet are great and they don't bother me at all."
Dad was wearing non-slip slipper socks
with his white tennis shoes...
so I  hope it will not interfere
with his sore toe and the side of his foot....
My sister planned on taking photos
of Dad's feet
but he was in such great spirits,
she did not want to chance upsetting him.
He told her the staff had already taken
pictures of his feet.
Dad told them he was very happy
I called him on the phone.
My sister told him I call every day
and check on him.
Dad smiled a reassured smile.
Dad was in the process of telling them
how much he loved music,
just as music began
coming from the dining room.
Mom wheeled him back inside,
as my sister followed.
A  player piano filled the room
with wonderful music,
setting the mood for lunch.
Dad asked them to move him
closer to the piano
and Dad began to
play the piano on the table.
He smiled as he moved his fingers
up and down the table...
I am sure his imagination
had him playing a fine concerto!
He seemed very happy and pleased.
My sister video taped Dad
playing his imaginary piano...
She will email it to each of us,
once she gets it uploaded.
The staff began to serve lunch,
so Mom and my sister kissed Dad good bye...
As always,
my sister stood at the door,
and blew him a kiss....
Posted by Donna B. at 10:31 PM

Love that picture of your Dad! Glad to hear of another good visit.

soundslike a wonderful day for everyone. it's cute about the piano playing dad. he has a great smile. have a great day.

Aren't you glad your dad was happy and having a good time? He has such a nice smile.

A wonderful day for all!! I am sure it made you happy too!!