So far, we have been so very Blessed to have had two excellent visits the last two years with Dad on Father's Day...

I had put an email out to all my siblings prior to driving out to CA, asking who would want to join us when we went to see Dad on Father's Day.  Two of my brothers in CA, have children, and had plans with them during the day.  We all know visiting later in the day, is NOT the best time to see Dad.  So my brothers K____ and S_____ will visit tomorrow or the next day, to give Dad more visits during the week.

My sister and I drove to In and Out for a double double with grilled onions, fries, and strawberry shake for Dad.  We planned to meet my youngest brother E____ and his girlfriend, M_____ at the nursing home at 11:00 am.  When my sister and I arrived, they were already sitting with Dad on the patio.

When Dad saw my sister and I, he called us each by name... only he called me Holl Doll and my sister Donna.  Close.  Later he called us by our correct names, so no worries... 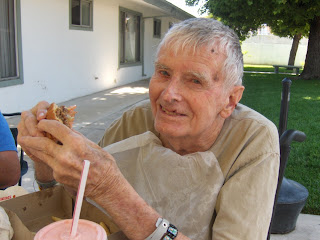 When he saw what we had for him to eat, he grinned ear to ear, and began to devour the burger with four huge bites at a time.  I cautioned him not to choke!  I noted he had not been shaved, and his nostril hairs were creating a substantial mustache on his upper lip.  His ear hairs would have made perfect nests for the birds and his eyebrows were hanging down into his eyes.  I excused myself to find his Angel, Doctor-Doctor, to ask if she could please, spruce him up a bit...

After Dad had finished his lunch, we gave him his gifts and read him his cards.  Dad just loves cards and listened to the words intently, closing his eyes to concentrate. 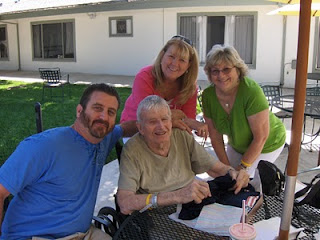 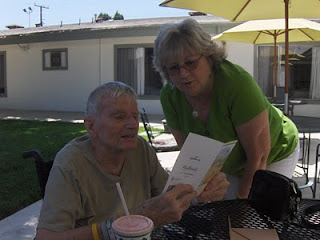 With perfect timing, Doctor-Doctor appeared to take him to the showers.  When she brought him back, his hair was neatly combed and he was all "de-haired".  He looked so handsome!  We wanted to take pictures and Doctor-Doctor graciously took them for us.  She had Dad stand up and walk with her.  It was wonderful to see him smiling, happy and walking so proudly. We all joined them to walk briefly around the patio... 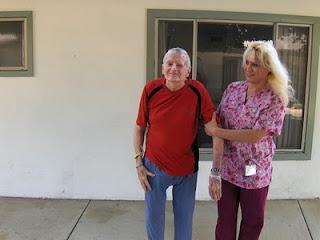 There was Elvis Presley music softly playing from the lunch room off the patio.  We all were enjoying the music, the gentle breeze under the trees and the gorgeous day.  The music changed to a fast paced mariachi, and Doctor-Doctor coax Dad into dancing with her.  We all roared with laughter and Dad swayed back and forth, tapping his foot, kicking out a leg and foot, and shaking his booty!  It was so wonderful to see him so animated and happy.

When we sat back down around the patio table, Doctor-Doctor asked him to sing Ava Maria.  Dad closed his eyes as if trying to remember the words...then loud and strong, he sang the words so beautifully.  I was beginning to get teary eyed when he suddenly went off key, made a funny face, and threw his head back laughing!  Course, we all joined in laughing and clapping.

Alzheimer's has removed all of Dad's previous inhibitions.  Dad no longer has any social filters.  He used to be so uptight, prim and proper.  It is so good to see him eat with gusto, say what he feels and respond with complete abandon. I can't stop smiling just thinking of "how much more free" he seems.

Another CNA brought Dad his lunch on a tray.  He looked at it and told us he was too full.  We confessed to smuggling the In and Out for him and she smiled and said she would leave it and not to worry if he did not eat anything.

We settled in around the table listening to one anothers conversations and taking pictures.  My brother shared about his new business, his girlfriend's new job, my sister had been taking some video of Dad and my brother did as well.  They began discussing technology and about uploading their videos to you tube and keeping it private. Dad began talking about when he first met Mom.  We have all heard the story of when Dad first met Mom while on liberty with two of his buddies and saw Mom and her girlfriend coming down the street... 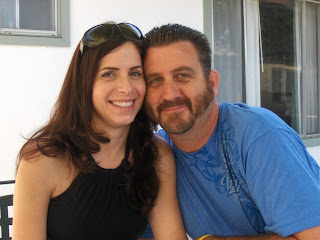 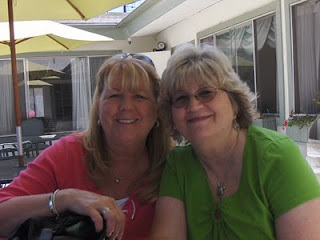 Today, he went a step further into the details of that day.  He talked of how they danced and rode bikes around the lake.  The twinkle in his eyes told us far more when he remembered the beautiful silk scarf around Mom's neck and how he KNEW the other guys would not stand a chance, because he would make sure he got her interest first.  He complimented her on the beautiful scarf around her beautiful neck.  Mom took the scarf from around her neck, and gave it to Dad.

He told us how he wanted to take Mom back to Seattle to the place they first met, to remember and ignite their romantic fire.. We all sat spellbound, as we had never heard this part of their beginning...

My brother took the initiative to ask Dad about the initials, they each used below, their names when they gave one another a card...AML AML.  Growing up, each of us had quizzed and guessed tirelessly, to find out what the initials meant.  Neither of them would tell.  It was their secret...

Dad openly told us what they meant.  All my love, all my life.

Dad's face had that look of such love and happiness.  Just his silence in recalling those special times together, without words, his face told us everything we wanted to know...

Dad explained that he was suppose to have two weeks liberty, but there was some mix up and he was told to return early.  Dad was late to return, because of meeting Mom.  His eyes glistened as he told us how he would never have met her, if he had returned on time.  My brother remarked that none of us would be here either, had he returned when he was suppose to.

Dad went on to tell us how he got an attorney to fight for him, because he did deserve to have those two weeks.  He won his case.

Dad closed his eyes, as if he magically stepped into some type of a time machine, and was transported back in time, almost sixty-five years ago...I wish I could describe in words how his face looked.  Suffice it to say, that we each looked upon his face and smiled broadly to one another.  We knew, in his mind, he stood magnificent in his Marine uniform, holding his arms out to Mom as they glided across the dance floor...


We all were hungry and decided to get some lunch.  Dad urged us to leave and eat something.  He asked us to take him to Doctor-Doctor.   One by one, we leaned over to hug and kiss him in his wheel chair. As Doctor Doctor stood beside Dad with an arm full of towels, we all stood like a chorus line and threw him our kisses. He threw them back to us, along with a big smile.  He had been thanking us profusely for our visit and for loving him so much.  He told us how he had two families, one at home and one here at the nursing home.


As we left, E___'s girlfriend told us, "What your Dad could not say in words, he told us with the twinkle in his eyes and the love in his heart." We all whole-heartily agreed. 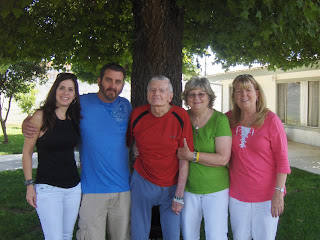 How wonderful that you all shared this special Father's Day!

What a wonderful, touching post! So happy that you all had such a nice, happy time with your Dad, on Father's Day. Blessings, Marguerite

Donna - this is such a great post! I'm smiling from ear to ear as I'm sure you did that day. It makes me think that one good thing about Alzheimers - it makes you appreciate these kinds of days much more.

A day to remember for sure. I love how you talked about how the Alzheimer's has removed his inhibitions and given you a chance to know him in ways you did not before.

it looked like and sounded like a wonderful visit with your dad on Father's Day! what a joy it must have been to see him so animated and sharing so many wonderful details about him and your mom; I love that AML!!

After everything your dad - and all of you - had been through recently, it is such glad news to read of this Father's Day gathering. Having him be so lively and present - reliving the moment of meeting your mother - may have erased some of the harder times. So happy for him, for the whole family, that you had such a joyous day. xoxo