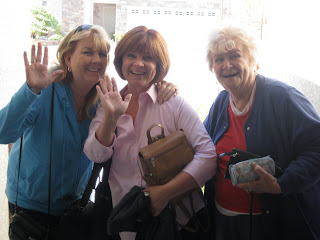 The girls arrived at my house a little after 11am.  I took a picture of them when they arrived at the door. (We usually have two more gals that join us, but they had other plans and could not attend...WE MISS YOU GUYS!!!)  I do a wet board listing the weekend's events, when our co-host does it, she goes all out with photos and witty sayings. 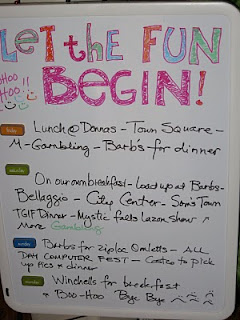 We snacked on salsa and Trader Joe Identity Crisis chips (with corn, potato and brown rice) while I popped the garlic toast in the oven and served the salad...

The girls and my husband, all voted and decided Izzy's new summer "do"  is NOT cut too short and I should not complain the groomer took off too much fur.  Too late, I already complained.  Basically, I was in shock. I will have to go in Monday morning, eat total crow, and apologize. 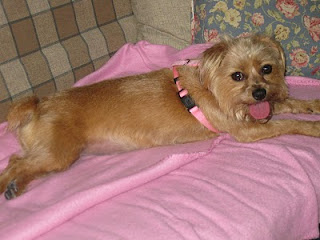 After we finished lunch, I drove us down to Town Square, where we met our other girlfriend (our co-host) at Whole Foods.  After hugging and smooching our 5th cohort for the weekend, we each selected our favorite flavor of Gelato, chatting and walking through the store.  My sister and I broke off and were searching for some Raspberry Beer called Framboise Lambic Belgian Beer.  We found with the help from one of the Whole Foods liquor employees.  He suggested getting the chocolate beer to float over the top (we ended up not liking the chocolate.  It dialed down the delicious raspberry taste of the Framboise)... 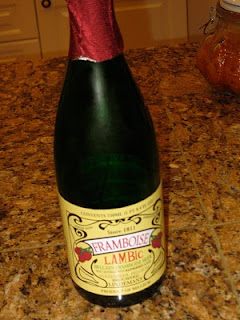 Another one of the gals needed some Burt's Bees Spritzer for her face. Mom had never been in a Whole Foods before, so she was having a blast exploring.

Afterward, two of the gals broke off to go to the Apple store, while Mom, my sister and I went into the Brighton store so Mom could buy her favorite perfume and lotion.  All three of us LOVE Brighton, so my sister and I had no problem waiting and entertaining ourselves checking out all the baubles.  The sales lady told Mom she was so close to getting a free umbrella and asked if she needed any earrings.  So by the time we left, in addition to what she came in for, she walked out with a HUGE umbrella and another pair of earrings.

The two at the Apple store, met us as we left Brighton.  I asked who wanted to have their brows threaded and everyone wanted to know what it was like.  We walked into the threading salon, Eyeborws R Us, like an invasion... five women and one Cosmetologist.  She was working on a young woman who graciously allowed us to lean over and peer over the Threader's shoulder to observe the technique.

The Cosmetologist was middle eastern and from Manhattan.  She told us it took thirty years to learn how to thread.  Middle Eastern women thread their arms and entire faces, so they learn to be very proficient.  It takes experience, otherwise you can cut the skin if one does not have the experience.  When she finished the young gal, I sat down and in less than ten minutes she has finished shaping and removing all excess hair on my eyebrows and upper lip.  She told me I would not need to have it repeated for three months!

Everyone had something done and we all agreed we would definitely do it again!  The owner took a group shot of us outside the shop. 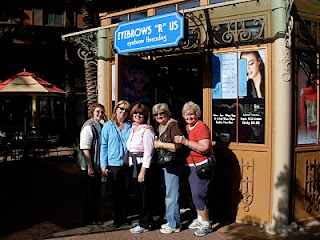 From there, we checked out the Hello Kitty store and then shopped and bought books in Borders.  Mom was anxious to gamble, so our next stop was at the M Resort.  We spent a few hours there playing penny machines.  Mom won, but put all her winnings back into the machine.  My sister and I won and printed out our winning tickets and cashed them in after we finished, so we left with money in our purses.

We were all starving at this point, as it was almost 8pm.  We drove back to our other girlfriend, who is the other co-host of our Nevada weekend.  She had a delicious home made chicken soup in the crock pot.  What gave it so much flavor, was the rind of one lemon. She also served a yummy salad and scrumptious roasted garlic bread.  After dinner is when we brought out the raspberry beer...ooooh boy was it delicious!!!

Everyone brought out our laptops and we began puttering and sharing.  Our eyelids were beginning to droop from our full day of activities...(or maybe it was the beer) yet, we still made room for ice cream and cake and then decided we would all get some sleep so we could start fresh the next morning...
We were so tired, my sister left her purse behind! (I wonder why?)... she did kinda smell like raspberries...
Posted by Donna B. at 7:29 PM

You girls know how to have fun!

These kind of weekends, with "the girls" are just the best! I´m so glad you were able to have such a good time. Thanks for posting pics. I enjoyed seeing you all!