A change in our plans...

Saturday, Mom read her book and drank coffee while my sister and I took Izzy for a walk.  We had a big day planned, and were anxious to get started...

When we arrived at the other co-host's home, the other two gals were still in their pj's drinking coffee, munching on bagels and fruit salad. Of course they were working hard on their laptops. One was doing a page of one of our photos and the other was working on a photograph of her grand daughter.  She had made an image of her grand daughter's face, and transformed it into a brush so she could stamp it as a background behind her photograph. 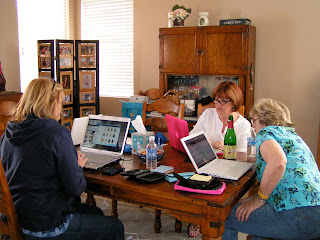 Everyone was kind of dragging and anxious to start some projects, so we all decided to hold off going to Bellagio and City Center until later.  My sister opened her laptop to discover she had some how, lost all her photographs and her iTunes account!! 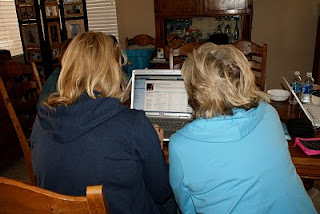 Two of us helped her retrieve the photographs.  Mom was reading her book since she could not find her laptop and came without it. She took a few naps as well, storing her energy level, because she wanted to hit the casinos again!! 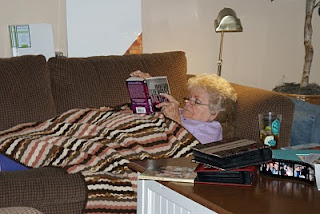 Our hostess showed us some cute pillows she made for her grand kids for Easter.  We watched a video demonstration of how to make the pillow.  Everyone but Mom and I planned on making some.
Everyone was enjoying doing their own thing, interacting, joking around, various conversations and of course, laughter, lots and lots of laughter...
When we were all blurry eyed and starving, we piled in the car and drove to Applebees for some dinner. After all, we needed some energy to keep up with Mom to go gambling again!
Everyone wanted to return to the M Resort, so off we went.
A good time was had by all.  Some of the girls won, but I lost all my winnings from the night before.
We have the best time all playing one machine.  We scream, whoop and holler when we hit a good jackpot.  We really had so much fun.  Mom just goes crazy at those slot machines...AND SHE WINS!!!
Some where around midnight, we gathered everyone up and piled back in the car.  We were so tired, we just left our computers at our hosts house and I drove us back to my house.
I had cranked up the spa for us to enjoy and relax... but we got home so late, we were too tired to go in...
Posted by Donna B. at 3:30 PM

Hope you hit the big one next time at the casino!

Love the picture of your mom reading!!