My husband and I went to Laughlin to meet up with one of my dear blogging friends, Jeanie of Living Consciously.  We met for lunch on Valentine's Day...  She was just as wonderful as I thought she would be.  Her husband Doc, and my husband enjoyed mutual conversations and Jeanie and I spent more time talking, (having a few "toddies") than playing the slots.

Always thoughtful, Jeanie presented me a Valentine's present from her dog Dodger, to my dog, Izzy.  A cute little hedgehog (which she promptly tore open and tried to eat the squeaker) and a hard, lime green, chew bone that also squeaks.  She is still figuring out what to do with the bone, as most of her toys are "fuzzy".  She was tossing it around yesterday... 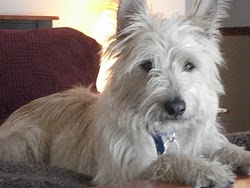 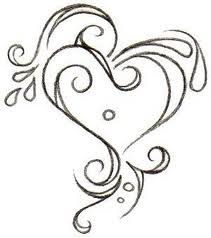 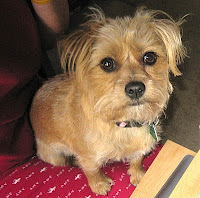 Izzy (my dog)
﻿
Jeanie and I both decided they would make a cute couple...what do you think?﻿ 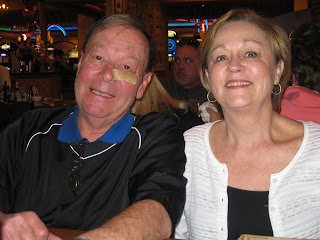 This is Doc and Jeanie.  Doc is a knowledgeable dog owner, protector and great fan of dogs...One of his pet peeves are owners who don't pick up their dog's poops...and people who don't respect the etiquette of the Dog Park... (see the band aid? ) He doesn't put up with any nonsense.... (just kidding...he had some minor surgery...but the rest is absolutely true!) 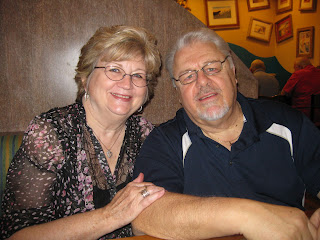 Me and my honey...
On the way home Tuesday morning, he suggested we stop at a neat old place in Searchlight.  He discovered it when he used to work and was checking out a project out in that area.  He told me I would love it and said it was like going back in time to the 50's...
It is right off Hwy 95 and is called the Searchlight Nugget.  It is about 20 miles from Cottonwood Cove.  When you walk in, you hear the sound of money falling from slot machines.  Now a days, the machines generally spit out a pay voucher with a bar code.  You can cash it in or stick it into another slot machine like money.  No more getting your hands dirty from gathering up all those coins from the coin slots...
Wonderful aromas of bacon and coffee fill the air.  The prices were extremely reasonable for the generous portions.  They are famous for their co﻿ffee which costs....(are you ready???) ten cents.  Yep, that's what I said, TEN CENTS!  Delicious coffee!!  I think I had six cups. 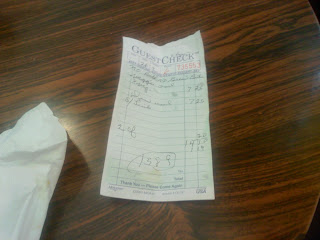 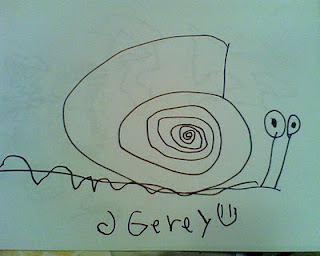 Pretty good little artist, eh?﻿
﻿
The eight year old is quite the reader.  He is required to have 16 points per quarter, and he already has 45 points.  Unfortunately the extra points don"t carry over.  ﻿He is like his Mom...he likes to get everything done in advance so he has more play and fun time.
They both are looking forward to their being off all next week...9 whole days! 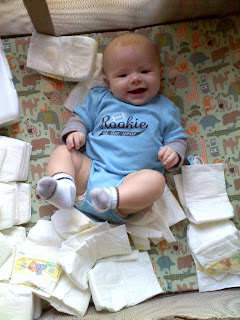 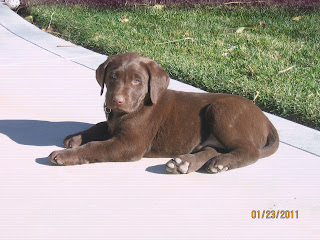 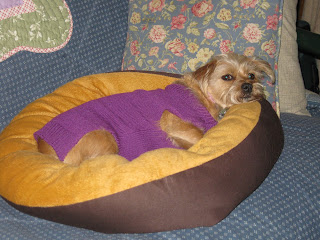 As promised...Izzy in her purple sweater....and relaxing in her bed in my office... 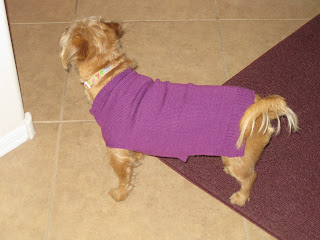 Fits her great...now if we could just find a new rain proof jacket...her belly has grown and she no longer fits her little red parka anymore...
Posted by Donna B. at 6:12 PM

Sounds like you guys had a great time! I love the picture of "Gerey", and baby Jacob with the diapers!

I agree...your doggies would make a good pair!

Thanks for the update on your grandkids! They certainly are a talented bunch!

Dutch is a cutie!

I do think Dodger and Izzy would make a cute couple! sounds like you all had such a good time meeting and spending time with each other!! That Searchlight Nugget sounds like a great place to visit, wow 10 cent coffee! You don't see that any place these days. I have to say one of the reasons I can't get excited about going to casinos is the way they do the cards with playing; I liked hearing that klinking of the money, always exciting to hear it (though rarely at my machine, LOL :)

Jacob is so cute and WTG to your other grands for their achievements!! To be a reader is a good thing and to be able to perform in front of an audience and do it well is a magnficient feat!

And you thought I was GONE for the day? BOO. Terrific pictures of all the major and minor players. I simply smiled all the way through, which I would hope is the goal here. Sounds as if you had a wonderful day.

Why do I have a craving for Bacon? It's midnight and time for SLEEP! Good night, dear friend. Glad you shared your family.

I'm so glad you are feeling well enough to do a post and it was very fun to look back on our visit with you guys. Thanks again for coming.
The place in Searchlight sounds like a walk back in time. I know I would love it.
It sounds like the 6 yr. old did a great job in his play and had lots of fun too boot.
Speaking of fun, the pictures of Izzy, your Grand Pup, and baby Jacob are all as cute as can be.

Your grandson is getting bigger fast. He´s such a cutie!
I´m so jealous that you got to meet Jeanie and Doc. She´s one of my favorite blogs to read and I value her friendship! I´m glad you guys got along. You looked like you had a lot to laugh about.

I really enjoyed catching up with you! Looks like some great times! I am so behind more so than usual.