Mom and my sister, Holly went to visit Dad today.  He was in GREAT SPIRITS!  They found him in his room with five nurses.  The supervisor was checking his sugar level and the four interns were watching.  Dad was loving the attention of all the ladies.  He was thrilled to see Mom and my sister join the party!

They wheeled him out to the patio for some absolutely glorious sunshine.  Really was a beautiful day!  As always, he smiled a big happy smile feeling the warmth on his skin. 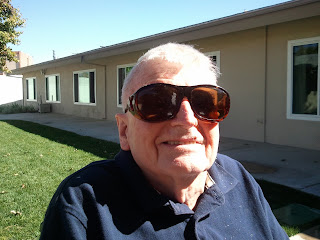 He talked of having Guard Duty and the fact too many of the residents were drinkers, which he did not approve of.

Dad used to guard Navy and Marine prisoners, who committed crimes while in the service, when Dad was in the service with the Marines.  He worked in Bremerton, Washington and then when we moved to California, he worked down in San Pedro.  He is probably recalling that time in his life... 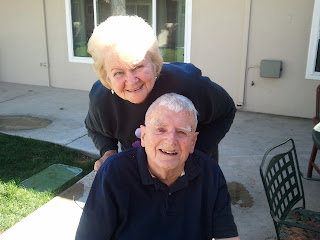 Mom and Dad
Mom and my sister checked his toe, his foot and his eye.  Everything looked pretty good.  Dad told them how well they care for him and change his foot dressings every single day.  He told them he "feels just fine".
Dad had a fresh hair cut and facial hair trim, so he looked nice and sharp.
Today is my oldest brother's 60th birthday.  I am the oldest and then this brother.  My sister sent the picture above of Mom and Dad to him with a text sending him birthday wishes and love from all of us.  My brother called back and Dad took the phone and sang Happy Birthday to him.  Mom and Holly were floored when Dad not only sang in tune, in full voice, but also remembered my brother B____'s name and included from Mom, Holly and me at the end, keeping in tune with the melody.  Very impressive!  My brother said it made his day...
They all sat and talked.  Dad told Mom he needs some money because he wants to buy a new suit and tie.  (This is something Dad used to do when he lived at home.  He constantly went shopping, spending his pension check as soon as it came in the mail.  Dad always wore a suit to church, to visit at the hospitals, nursing homes and hospice when he was a Chaplain.  He would wear a suit when he used to take me to dinner when I was single and lived alone.)
Mom asked him if he felt buying a suit and wearing it would make some of the other residents feel badly because they did not have suits or nice dresses to wear.  Immediately, he thanked Mom for reminding him, because he would never want to make anyone feel badly...
He asked Mom about his VA Insurance bill... Dad was very vigilant making sure his life insurance was paid every month... Mom assured him she has it automatically deducted from their account each month and double checks to make sure it has been paid.  He smiled lovingly at her, telling her he remembers how sharp she is with the details...
When Mom and Dad were raising all six of us kids, Dad's VA $10,000 life insurance policy was the only amount of life insurance they ever had.  Now, Mom has a policy on herself.  Thank the Lord for watching out over both our parents while they raised us!!
Mom commented on how good his lunch smelled, waiving onto the patio...  My sister had not eaten breakfast and was starving.  Mom mentioned to Dad she was going to take Holly out for lunch for driving them both over to visit Dad.
Dad told them he needed to eat too, so they wheeled him into the lunch room and over to a table with two of his friends.  Dad saluted one of the gentleman, and he sharply saluted back to Dad.  He saluted the other gentleman who ignored Dad.
Dad began to happily chat with his saluting buddy in between bites of his lunch.  It is my sister's tradition with Dad to always blow him a kiss.  She attracted his attention through the window to the lunch room and sent him his kiss.  Dad caught it and blew her one back, then turned to continue his conversation with his friend.
On the way out, Mom saw the Administrator and gave him Doctor-Doctor's get well card to send to her.  Dad's favorite nurse (Doctor-Doctor) is out after hernia surgery.  The Administrator thanked her and said he would make sure it went out in the mail on Monday...
Posted by Donna B. at 7:30 PM

What a nice visit! Again I am impressed with how your Mom handles this and how she knows to say the right thing to you Dad as in the case of buying a new suit.
I'm sure your brother was thrilled to hear from your Dad and I know that card will make Doctor Doctors day!

Your dad is a rock star! How handsome he is and what a wonderful person, too. A real character, the kind they don't make anymore. He reminds me of Jimmy Stewart :)

Happy birthday to your brother!

I totally smiled as I read this. Your dad is such a handsome guy and together, your mom and dad make a beautiful couple. The happy birthday song must've made your brother's day for sure. So glad that he had a good day. I'm praying that there will be many more.

Awe what a sweet man. And happy birthday to your brother. sandie

Beautiful post, and how good do your mum and dad look in that photo. I can imagine how your brother must have felt when your dad sang happy birthday to him. Truly a blessing. I am so pleased that your dad was in such good form. He really does look a dear man, and it was so good to be able to see those photos. Wasn't that sweet what your mum said to dad about buying the suit, and how it might make the other people feel. She is obviously a real sweetheart too, and it can't be easy for her at times. I'm sorry if I have missed any of your posts, but I have been in bed for four days and still not feeling any better with this flu. Take care.

Oh, Donna, this post brought tears to my eyes. I love it that your Dad still wants to wear suits. So charming, and so respectful of others.

I'm so glad your mom got to send her card. I do love reading about the visits to your dad... about your parents and family on this blog. You are so wide open with the hard days and the miracle days of wonder. Thank you.