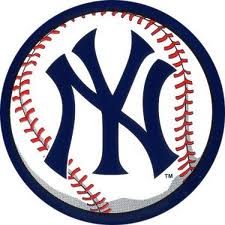 My son in law is an avid and devoted New York Yankee fan.  They go watch a Yankee game, preferable against the Angels (my younger daughter's boyfriend's team), on their vacations.  They all watch all the games on TV.  He and his two sons wear their Yankee caps e-v-e-r-y-w-h-e-r-e, and even my oldest daughter, wears a pink one.

Today, my six year old grand son learned he would be on the Yankees Little League team. (Last year, he had to play for the Angels...) His older brother, the 8 year old, has decided to "help out" with the team this year, instead of play.  When they found out, both of them were jumping up and down all excited and ran to their Dad who was smiling proudly! Together they all leaped around jumping for joy!! It was a great day for celebrating!

At a recent PTA meeting, one of the members who's son used to play baseball with my 8 year old grandson, asked why he was not playing this year.

That was a happy post. I can imagine the delight for your little grandsons! Excitement all round.

How fun that your grandson wants to help with his little brother's team. My two oldest grandsons are already having baseball practice (indoor) while they are still in the middle of basketball season. My 5 yr old grandson loves baseball but hasn't been on a team yet. My son-in-law was a professional baseball player for about 10 years so when we have family get-togethers there are always lots of bats, balls and gloves.

Too bad people "age out of" reverse psychology!... Okay, I am now having to verify the "word" phistans. Is that a Detroit team???