Another birthday party for Dad... 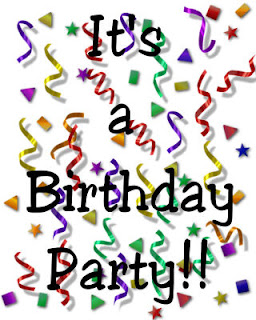 I called Dad this morning, and he was playing Bingo.  The nurse asked me to call back between 1pm and 1:30pm.  When I called back, they told me Mom had just left...

When Dad came on the line, he told me Mom had been to visit.  He told me they sat out on the patio and talked for about 20 minutes.  I asked if they had a nice visit and he said they did.

I asked Dad if he remembered singing Bye Bye Blackbird to me, and he said, "I sure do" and then broke into song...I joined in and we sang the song together.  He told me what a nice song it was, and he would start singing it to himself when he goes to sleep.

I asked how the Bingo game went, but he wanted to tell me they were having a birthday party for him today...I told him I was so happy for him. The nursing home is having a Christmas party today for all the residents and staff...but if Dad wants to think it is his birthday party, that is fine with me...

He was rambling about green houses on a 45 degree angle and wanting to buy a grocery market, when all of a sudden, I heard him say, "Hello, may I help you?"  (Apparently someone walked into the room.) Dad told me he had to get off the phone because someone wanted to use the room...I told him I loved him and he told me he loved me too, and he hung up...

Mom called, shortly after I hung up with Dad, and told me about the Christmas Party.  She said Dad kept talking to her about waiting for a package from me with the little red man in it...he really is preoccupied with that painting I did. (He'll have a print of it by next week). Mom laughed and told me when she and Dad had been talking on the patio, Dad told her he can't understand what she says to him, and she can't understand what he says to her.  She told me she agreed with him and they both shared a laugh.

I had more I wanted to discuss with Dad.  I had some childhood memories I wanted to share with him and see if he remembered.  I had been thinking of when we lived in Bremerton, Washington and rode the Ferries.  I have vivid memories of he and  I on the top deck.  He was carrying me on his shoulders and I recall feeling a little frightened, because I was so high.  Dad took a step downward, and I screamed thinking we were jumping off the boat.  He reassured me in his soothing voice. hugging me close, he would protect me and not let anything bad happen....
Posted by Donna B. at 11:50 PM

just wanted to stop by and wish you a wonderful holiday season... i stop by often to follow the journey with your dad, as we are just starting down the path with my hubby... thank you for many pointers and i hope that your dad enjoys his holiday/birthday as well!! take care!!

It's great that you have been able to share those memories with him.
I'm also glad you are good with having conversations that take place where he is at the moment. When I went to nursing school, we were taught to use reality training, always reminding a person of what day it it, where they are, if they talk about a parent we were to remind them that that person was gone. Now we just talk about what they want to, and if they think they are getting ready for work or something like that we just follow along. It's so much less frustrating for them.

You and your times with your dad are wonderful..I know how special they must be..I take care of my Mom full time..Memories are good.
It is funny how my Mom tells me the same story in one days time.
I am blessed. May your Holiday Season be filled with joy.
Katelen

Stopping by to wish you and your family a Very Merry Christmas.

Hi Cindi, oh Bless you! That has to be so difficult. Feel free to email me at donnab6464@gmail.com if you wish to talk. I highly recommend THE 36 HOUR DAY by Nancy Mace and Peter Rabins. Thank you so much for your holiday wishes...the same to you and yours. See you soon!

Mari, I have learned to stay in the moment with Dad, because really, that is all I have...and my past memories...Happy Holidays to you and your family.

Hi Poetic Artist (Katelen), thank you for stopping by. Bless you for caring for you Mom. Anything I can do or share to help you, please let me know. My email is donnab6464@gmail.com. You are so right, memories are precious! I find, the world gets smaller and closer every day. Enjoy your Blessed holidays...