In Memory Of Tony Curtis...

This morning we learned the great Tony Curtis died last night at his home in Henderson. About ten years ago my husband and I had the pleasure of meeting and enjoying the company of Tony and his wife Jill on two occasions.

Tony and his wife frequented the Prime Steak House inside the Bellagio Hotel, where my husband's son works as a bartender.  Tony and he were friends.  Tony invited my son in law, his wife, their children, and us to come to their home in Sun City, which is the bigger 55 and over community near our community.

He greeted us in a pair of crisp white shorts and sandals.  "Hello my darlings!" is what he said as he gave us each a bare chested hug.  He was so down to earth and so hospitable.  He showed us all his art work, which he rarely hangs on the wall.  Instead, he prefers to prop them up against the wall, along the floor, so he can change them around to suit his artistic mood.  He also does shadow boxes and gave us a tour of his studio.

Jill is also very welcoming and kind. Her love of horses, both she and Tony developed the Shiloh Horse Rescue Ranch, taking in abused, unwanted and neglected horses. Their home is unpretentious and unadorned  by what most people would think of a "movie star's home".  He had his movie chair with his name on the back, sitting in front of the panoramic window looking out over the golf course behind his home.  They have one of those infinity pools that look like it just overflows onto the golf course.

He had various pictures of him and other movie stars.  One in particular of him and Jack Lemon, dressed in drag from SOME LIKE IT HOT, sitting on either end of an ornate couch.  When we visited, it was before anyone knew of Jack Lemmon being ill with colon cancer.  He told us before we heard it on the news.

I told him SOME LIKE IT HOT was one of my favorites, along with SPARTACUS, THE VIKINGS, HOUDINI, SWEET SMELL OF SUCCESS, THE DEFIANT ONES and FORTY POUNDS OF TROUBLE.  He was so thrilled I remembered so many of his movies.  He took me by the hand and took me into his bedroom closet and showed me the hat and jacket he wore as the rich Shell Oil Cary Grant talking character in SOME LIKE IT HOT. He told me it still fit him.  He autographed a DVD of a colored version of the movie and gave it to my husband and I.

He showed me the beautiful tile work he supervised in his bathroom shower.  Beautiful turquoise tiles.  He also designed the mosaic in the entry of their home.  We all sat around enjoying his many stories about his life and career. Several of his stories would involve a piece of furniture he had in their home. His tastes were very eclectic.

The second time we saw him was at the Bellagio when we were at the bar visiting my husband's son.  Tony and Jill came in, remembered us coming to visit at their home.  We enjoyed a drink and some conversation before they went into the dining room for dinner. 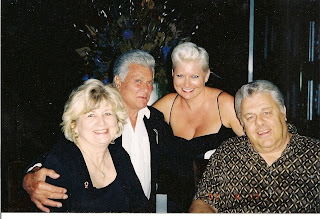 What a talent.  What a kind, generous, wonderful man he was.  Rest in peace, you are in good company.
Thank you for the memories...﻿
There will be a public memorial service on Monday, October 4, 2010, at 11am.  The news reported the family requests, in lieu of flowers, to please make donations to the Shiloh Horse Rescue.  See Shiloh Horse Rescue for further information.
Posted by Donna B. at 11:21 PM

I always liked him in any movie he made. He was so impossibly handsome when he was young!

His movies were definitely a part of the fabric of my growing up years. It sounds like his later years were very happy ones.

what a gracious man (and couple). thanks for sharing this special memory you have of him, Donna. I think we forget that there are celebrities are "just" ordinary people, married, raising family, hanging out with each other and friends, etc so it is nice to read about such a special man like he was. I am sure he will be missed by so many.

I know it saddens you. Sorry.

What a great memory to have of this wonderful actor! It's sad when the old actors die because it will never be the same in Hollywood.

I thought he was a great actor and personality. It sounds like he really was approachable and friendly. How exciting that you met him. He will be missed.

he was a great actor and i heard his art work also showed his talent. sounds like he was a just nice man. sorry for this loss for his family and the world. rose