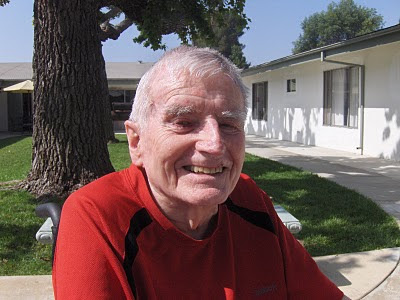 My sister went to see Dad this morning. She found him patiently waiting in his wheel chair, in the rec room, for the church service.  She wheeled him out on the patio to enjoy the Starbucks coffee and pumpkin bread she had  brought him. He ate about 1/2 the bread and a few sips of the coffee. It was a beautiful day and several of the staff girls were out there chopping onions and cilantro, preparing Menudo. It smelled really good....
She wheeled Dad around and then sat on a bench with Dad facing her. She was not sure what medication he is on, but he spoke VERY LITTLE crazy talk. He seemed "normal"...just like he used to be at home... He told her he preferred the sun on his face, even if he got a sunburn.  She moved him so he could be more in the sun, which made him give her a huge smile.

They talked about what a beautiful day it was.  Dad looked up at the tall palm trees off in the distance, admiring them with their beautiful fronds.  He told her he remembered the palm trees on the island when he was in the War.  He told her how the bombing made the palms tall, ugly stalks, all charred and burnt, stripped of their fronds.

Dad mentioned several times to her, he is getting forgetful with names.  He would start to tell her something about someone but he couldn't remember their name. She showed him pictures of my daughters and told him my youngest daughter would be having her baby soon.  Dad told her he already knew.  She told him of her daughter being in New York; he knew that too...

She told him how much I loved him and he said he knew. He told her how persistent I am in calling so I can speak with him. He couldn't remember my husband's name, but as she started to say his name, he thanked her and said his name.

He told how he remembered her setting goals and achieving them.  He remembered she tried out for cheerleader three times before she finally made varsity, her senior year.  She was speechless and the fact he could remember, meant so much.  He complimented her for sticking to what she wants and going for it.

She reminded him of some things he did for her when she had strep throat. When she was small, she could not take Penicillin. She can now, but back then, it made her sick. Dad came home late from work and brought her a black vinyl Barbie wallet.  It was red plastic inside with a coin holder (the kind you slide coins into) with a comb and a nail file.  She LOVED that wallet!  She was convinced his gift made her feel better.

She told him how much we all love him. He told her he loves his family too. He commented on how the nursing staff take such good care of him. He seemed very happy and content.

She couldn't see much of his feet. I had asked her to check out his cut toe from the clumsy Podiatrist... He had his compression stockings on and foam booties. She did notice a Band aid on his middle toe. His right eye looked bad again. It looked very sore, but didn't seem to bother him. He also has the barnacle on his ear again. She was happy to see he had his alarm bracelet on.

My sister always gives Dad a massage on his shoulders, arms, hands, and legs when she visits.  Dad loves it and told her how good it felt.  He told her how loud his room mate snores...she smiled and remembered HOW LOUD he snores...

The sun was making Dad sleepy.  He told her how guilty he feels when he takes a nap in his wheel chair.  She told him not to worry and to take a nap whenever he felt like one.  He talked of working out in the yard and garden, when he lived home with Mom.  He told her often he worked so hard, he had to go indoors to take a nap.

She saw Doctor-Doctor, but there were so many of the gals helping to make the Menudo, she looked up from her chopping and waved.  Dad was distracted with all "his wives and girlfriends", no doubt he felt as if he were in a Smorgasbord.  He appeared to adore them all.  She enjoyed seeing him so animated and happy, instead of paranoid and depressed.  She felt he seemed really happy and took the picture above to prove it.

She watched him and listened to his "enjoyment sounds" as Doctor-Doctor brought him a bowl of Menudo. He relished the spicy broth, smacking his lips...  She hoped and prayed, he would not be sorry, later.....
Posted by Donna B. at 11:08 PM

What a wonderful visit! I have to tell you that I am smiling after reading it. Those times are truly a blessing!

I got to say, your dad is a handsome fellow. I bet all the staff do love him!

This brought back all kinds of memories. My grandparents. My mom. Other people I've known.

It's hard on everyone and days when they can be more themselves is such a special blessing.

I like to think they gather little treasures to store inside of them. And when they have bad or off days, when communicating is difficult or pain consumes all their attention, I believe those little treasures open up and cover them in a place we can't reach.

I hope he has many many more days like this one.

LOL about the menudo; actually I have never had it, but hubby used to play in a band where they played at a lot of Hispanic parties and especially on New Year's, that was something they would make to welcome in the new year. People would be lined up to get it and would be asking him if he was going to get any; he would politely decline. I guess it wasn't to his liking, LOL.

seems like such a nice visit with your dad and sister. I have heard some people with memory problems do better with long-term memory which makes sense in that your dad could remember about your sister trying out for cheer leading.

and soon you will get to see him and your new grandbaby!!!! I know you are excited for both events!

That sounds like such a wonderful visit. Great memories retold. It warmed my heart.

Well it sounds like a great visit - and you can't do better then that. A sunny day and some menudo - what is that? Your sister got to check him out. He got some sun and a little nap. I remember those days my mom was in a nursing home - it was tough!
sandie

I am so glad she had such a good visit. I'm with Mari it makes me smile to read this too.