I called the nursing home today to check on Dad.  He is eating well and gained a pound.  He weighs 133.  Dad is weighed every Sunday, so tomorrow I will find out if he kept that pound on or lost more.
Super Bowl Sunday they called to tell me Dad lost two more pounds...

Last Tuesday, I called the nursing home to check on Dad and the Supervisor answered the phone.  She told me she meant to call me the night before, but it was so late...she wanted to let me know Dad's physician took him off the Aracept and put him on Namenda.  I knew he was going to do this as he had told me in his more recent email.  Apparently the Aracept has a weight loss side effect, which Namenda doesn't and Namenda is better for the later stages of Alzheimer's.

The supervisor also told me the doctor had lowered Dad's Digoxin from 2.5 to 1.5 and put Dad on Remeron to increase his appetite.  I IMMEDIATELY TOLD HER IT WAS SUPPOSE TO BE ON DAD'S CHART NOT TO HAVE REMERON....  that is the medication the psychiatrist used to keep switching Dad from it to the Lexapro.  The Remeron made Dad agitated, mean, combative and he wanted to leave, calling Mom and yelling at her.

The Supervisor said the doctor had just left so if she hung up she might be able to page him.  We hung up and I immediately sent the doctor an email, reminding him of why Dad was not suppose to be on the Remeron.

I called the nursing home back and she told me she reached the doctor and Dad would not be getting the Remeron.  Dad's doctor also emailed me, assuring me he stopped the order before Dad got it.  He also told me he had done another cryotherapy treatment on Dad and he had tolerated it well.

I emailed him back letting him know I did not think we should give Dad meds to increase his appetite.  If he truly is in the later stages of Alzheimer's and slowing down....I don't think we should force him to eat if he does not want to.

I wanted to speak with Dad, but he was sleeping. His male caretaker for today told me he was up in his wheel chair and went to activities today.  I thanked him for all he does for Dad and encouraging Dad to eat and join in.  We are very, very blessed to have Dad where he is...

Sharing stories and pics of my grand sons:  The ten year old had just come home from a band performance, having just found out he made Advanced Band (he plays the clarinet)... dressed in dark slacks, a white long sleeved shirt and tie.  His Mom told him he looked like an FBI agent and my grandson retorts, "I feel more like James Bond.  Take my picture Mom and I'll pose..."

So she grabbed the camera... He touched his tie, cocked his head to one side, and posed like he was alertly walking... She snapped the picture....

She forwarded his comment and the picture to me via text on my phone and my husband and I cracked up.  Both my daughter and I were laughing when I called her after receiving the text.  What a character!  Our family is blessed with a WONDERFUL sense of humor.

The eight year old overheard his comment and quipped back, "Then you better eat more popcorn like I do, instead of all those vegetables."

The ten year old rolls his eyes up at his Mom and said, "See what I have to deal with? I can't wait for G****** (his soon to arrive brother the end of March or beginning of April) to get here...then I'll have someone to share the load."  If I ever want to write a children's book, I got plenty of material and dialogue!

The eight year old is fearless, gregarious, also has a sharp wit and often figures out difficult video games when his older brother is stumped....which ticks the older one off despite being proud of his younger brother, calling him a wizard.

The ten year old is into all sports, everything & anything, doing everything well, except for his biggest challenge of keeping quiet in class. Both boys do very well in school.  The ten year old is not fond of sports, but loves making music, creative writing, computers and video games.  He is more reserved, but can hold his own often making comical or poignant observations.

Here is my latest pictures of little Jacob, my youngest grand son... so far.  He is 2 years, 5 months. 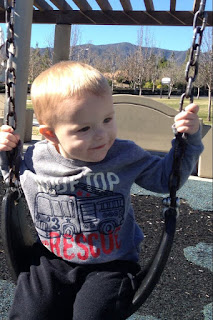 Swinging at the park in January on Mom's day off... 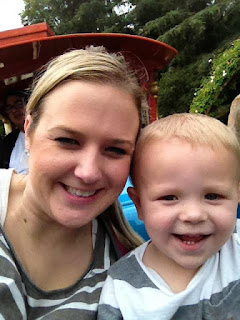 My youngest daughter Jodee and Jacob in February, just before Valentines Day, at Disneyland.

I will be visiting in California for my oldest daughter Holly's baby shower, babysit my husband's two grand daughter's a few days, visit Dad, family and drive back with my daughter Jodee as she will be attending a trade show here in Vegas.  We have shopping and planning to do for her upcoming wedding in July....

Everyone have a great, safe and happy weekend.

I can't believe how Jacob is growing! He is as cute as ever. The other two sound like real characters - maybe they get that from their great grandpa? He's a character too.
You're doing a good job of taking care of him. I know it's hard to keep track of all the meds and everything else that goes with having a loved one in this stage of Alzheimer's. You do it from a distance, and yet manage to follow up on things, and always, your love for your Dad shines through!

Lovely photos of your grandson there, and now exciting that you have another little grandson on the way. That's quite a dynasty you've started there! Love the stories about your 10 year old and the eight year old. Being a grandma is the very best, isn't it?! Take care.