Nice To Be In Chicago...

My sister Holly and Mom went to visit Dad yesterday.  They found him in the activity room listening to music by his favorite guitar playing Chaplain.  He looked all spiffy with a shave, hair cut and nails neatly trimmed.  Dressed in holiday red he was all smiles to see both of them! 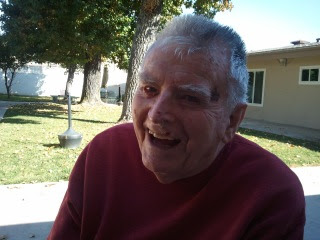 Dad 12-10-11
They took him outside to chat.  He seemed disoriented a bit as he told them both it was so nice to be in Chicago...  He told them he was happy and was so blessed to be in such a wonderful place where everyone took such great care of him.
Both Mom and Holly told him how handsome he looked and he told Mom how beautiful she was.  She shared some forwarded messages to him from some of their friends at church.  Mom and Holly could tell by the expression on his face and the fact he kept calling them different names from the ones they were discussing, that Dad had no clue who they were.
Dad's eye looks horrible and the lesions on his upper lip and left temple area seem to be growing, but Dad is oblivious to them.  He appears to have no worries at all, which is such a relief and we are so grateful to hear. Happily, Dad is wearing both an ankle wander guard and one on his wrist!  Double protection from him wandering off...
Dad yawned quite a bit during their visit and said he wanted to take a nap...so when lunch was being served in the lunchroom, Mom and Holly wheeled him in to eat.  Dad was served a delicious looking lunch of baked fish, mashed potatoes, green beans, jello, coffee, milk and ice cream.  Holly seated Dad next to an older gentlemen named Walter who never seems to have many visitors.  My sister said the next time they come, she is going to invite him out on the patio with them.  I think Walter was in the Navy if I remember correctly...
Mom said Dad polished off his lunch as fast as "Grant went through Richmond"... I had to laugh, as I know how fast Dad can empty his plate, but this expression is one of Mom's favorites...as she came from the south...
Mom kissed Dad good bye and Holly blew her traditional kiss from the window and Dad reached up to grab it as he always does...  It was a very nice visit.
Mom and my sister went to lunch at Millie's and had a nice lunch and conversation.  When Holly brought her home, my brother and niece's fiancé were both at the house fixing Mom's fence.  It had blown down during the last wind storm.  My niece has a dog and a cat, who both get out due to the condition of the fence, so it was a big relief for them to fix it for them.
My sister in law was there as well, so Holly, Mom and she visited in between supervising the fence repairs.
My brother in law is doing amazingly well after his surgery, although his stitches irritate under his jeans and he is looking forward to having them removed this week.
Posted by Donna B. at 2:10 PM

Donna,
Your 'dad stories' make me smile and fell all warm inside.

It's such a blessing that your Dad is so happy. I love seeing his big smile!

Donna, he looks so happy and definitely in the holiday spirit with his red on. Hope there are many many more good days for him.