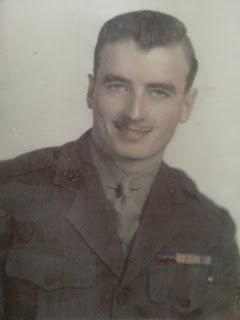 My husband and I arrived around 11:30am at Riverside National Cemetery in Riverside.  I completed the inscription request for Dad's Monument Plaque.   My husband and I had time to drive over to the Columbarium where my Dad's final resting place will be.  It is a double wide u shaped area, very nicely landscaped with stone benches with blue tile.

The day was muggy and hot with a few rain drops here and there, which quickly dried up after they fell. We met everyone at Staging Area One where we lined up to caravan to the covered area for the funeral.  Our official, Nathan, lead us in the procession to a beautiful grassy area up on a bluff, surrounded by large, thick pine trees.

Two Marines took at the beginning of the walk way and saluted as Mom and I carried the urn and Dad's flag.  I had brought a small picture of Dad and  it was placed beside his urn on a platform for the service.  The nursing home where Dad lived had sent the beautiful floral arrangement in the pictures.

Nathan explained the ceremony would begin with the Marines unfolding and unfurling the flag over Dad's urn, at which time the seven Marines would each fire three rounds each making a 21 Gun Salute, followed by the playing of Taps, by another Marine.  He said it was proper for those who had not been in the Military to put our hands over our hearts and those who had been in the Military would salute. We had ten Marines on deck in their Dress Blues.

He told us after Taps was played, a Marine would present the re-folded flag to Mom along with the spent casings from the 21 gun salute.  We all thought it was so ironic that Mom and Dad have 12 Grand Children, 5 Great Grand Children and 4 sons, which totals 21.  Each of them will get one of the casings. 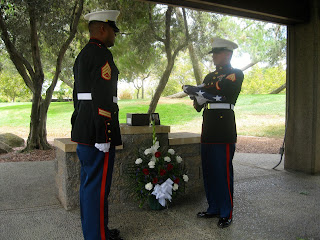 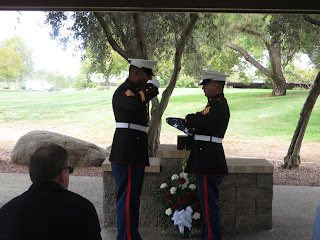 The pictures below are the Marines starting to unfold the flag... 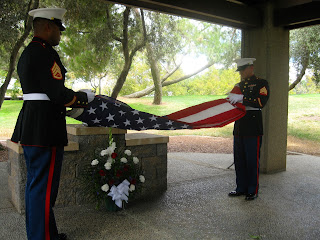 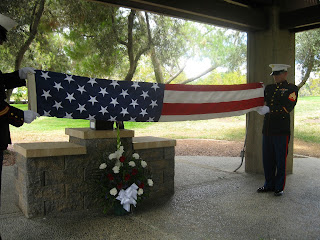 Despite knowing the gun salute would begin, I became startled when the firing started and stopped taking pictures....the pictures below were taken by my sister. 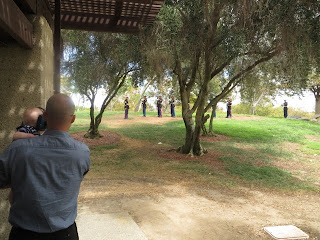 The 21 Gun Salute with the lone Marine on the hill who played Taps.

When Taps started, I could hear my Mom softly crying.  I saw my brother out of the corner of my eye go to Mom's side to comfort her.  I was already crying and struggling to keep my composure... I dared not look at any of my family because I could hear them crying too.  I knew I was going to speak after they presented everything to Mom and I was determined to do that for Dad and my family... 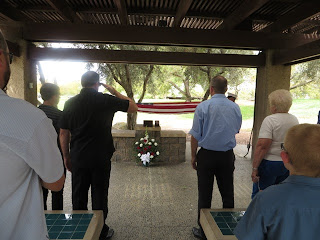 While Taps was being played.... 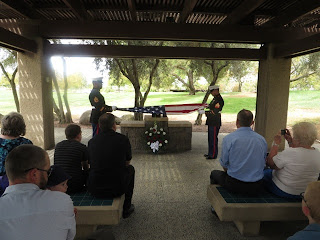 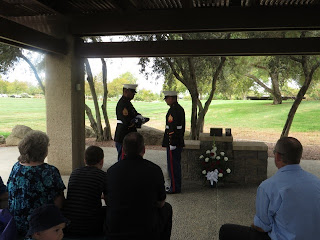 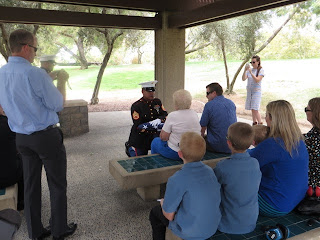 Presentation of the flag and gun casings to Mom....

I had planned to speak for two minutes... I had it written down on three note cards.  My voice began to quiver at the end of the first card and as I started in on the second, my sister Holly rushed up to my side and stood with me so I could finish...

Afterward, my brother's all hugged me and told me they would not be able to say anything after my words, because they all felt I covered everything.  Everyone was pleased with what I had said.

Nathan took a few minutes and told us how the Marines saved his life during battle so he was so honored to be present during Dad's funeral.  We all were very touched by the things he spoke of and the respect he paid to our Dad.  We all agreed how honored we all feel having Dad's final resting place in such a hallowed location.

My daughters and grand sons had written letters so those went with Nathan, who took possession of Dad's urn and his picture.  He would place all of it in the niche in the Columbarium later on that day and we would be able to visit Dad's final resting place after 4pm.  He told us he would personally see the flowers were watered the next few days.

We all stood around hugging and noticed what a nice cool breeze had come up and was gently refreshing all of us....we all knew it was a gift from Dad.

I shared the location of Dad's niche with everyone and asked if anyone wanted to see it.  Everyone decided they would wait until the final plaque is placed in 6-8 weeks and then we will go visit.  We agreed whomever is the first to visit would take a picture for everyone.

My son in law took video of the service on my brother's phone, so hopefully, we can figure out how to get it on a CD for everyone.  My brother S_____ is working on it.

I will be taking a break from blogging for a bit...I planned on converting what I have shared about Dad into a book and am looking into how to accomplish it.  If anyone has any suggestions, or has done so with their blog, I would greatly appreciate any information you could pass along to me.  I plan on doing the book for our family.

I want to give some thought as to how to continue my blog because we were so desperate for information when Dad was diagnosed and we remember what a nightmare it was.  If I can help just one family with my blog, I will be blessed.

I have acquired a lot of valuable information and don't want to just file it all away in a box somewhere. In my Father's honor, I would like to play it forward and share the information we have learned along the way...

God Bless each and every one of you who have ever been touched by this disease, be it from a family member or friend.  I send my eternal love and gratitude to all of you who have hugged me and comforted me with your words of support over the past four and a half years during our journey with my Father.

Most of you I have never met, but your warmth, concern, sincerity and caring words always came through and scooped me up as if you were, making me feel so very comforted.  On behalf of myself and my family, I want to say thank you all so very much from the bottom of my heart....

You've covered this ceremony well. I could hear Taps being played as I read and the whole scene moved me to tears.
Your Dad would be proud of all of you for the way you cared for him and supported each other. You have done him proud!

What a beautiful ceremony. Nice that each family member with get a casing.
I hope you do get to put it all in book form to help others. I don't know anyone who has put together a book of this kind although I could direct you towards those who could help with the general process.

Donna, I am sorry for your loss. Sounds like a beautiful ceremony, honoring a fellow marine. Your Dad would have been so proud.

When I changed over to "Bloglovin'" from Google Reader, I missed your blog so it was by accident that I happened to catch your post today. I'm glad I did.

As I read your blog today, I felt as though I were with you and your family as tears flowed from my eyes.
I have been following your blog for some time, even though I haven't commented very often. I will miss it and I want to wish you good luck with your book. I know it will be wonderful, as you are so eloquent with words.

Your families love for your father is so obvious from your posts. You always put his comfort and care first. I feel as if I was watching this journey unfold because of your posts. I will keep your family in my prayers, that you will all go forward knowing that your dad is freed from this disease and in a much happier place.

My heart goes out to you Donna, I have commented in more detail over on your other blog

I am so sorry that I am late in reading about your Dad passing. I've been busy with life.

I do hope your memories bring you peace.