Mom and Holly, my sister went to visit Dad yesterday.  They found him in his room just dressed after a shower by his Hospice CNA.  They waited while the nurse treated the cancerous growth on Dad's foot and then took him into the lunch room so they could chat. 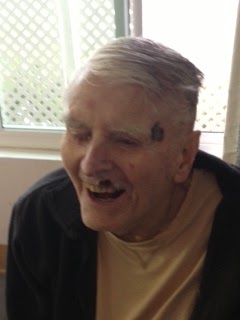 Dad rambled and did not make much sense...but he did tell them he has not seen his son S_____ in such a long time.  Mom and my sister looked at one another in shock...as Dad thought my sister was his wife...Dad usually thinks my sister is me so she wondered if Dad thinks she has not visited in a long time too?

Mom told Dad his son was very busy with work...and Dad told her he knew that...Dad continued on with his rambling thoughts, changing subjects and reason often...

They noticed the cancerous lesion on Dad's upper lip is getting bigger as is the melanoma on his temple.  He keeps his right eye with the skin cancer on the lower lid shut all the time now.

Doctor-Doctor arrived with hot dogs and chips for Dad as well as Mom and Holly.  My sister thought it was unusual for both of them to be served lunch along with Dad...but she went with the flow...only to find out later someone had donated the food to the nursing home.

Dad scarfed down his hot dogs and chips almost before my sister and Mom had even taken a bite.  He ask Doctor-Doctor if he could please have another hot dog and more chips, which she did...Mom and Holly watched in amazement as he devoured the second one as if he were in hot dog eating contest.

No sooner had Dad finished chewing the last of his hot dog, Doctor-Doctor arrived with his lunch of barbecued chicken breast, french fries, sliced cucumbers, jello, ice cream, juice, coffee, and milk. Holly was feeding him, but apparently not fast enough, so Dad took the fork and continued to feed himself...

Doctor-Doctor arrived to take Dad back to his room.  She assured Mom and Holly she would get him all cozy and ready for his nap.  They said their good-byes and Holly blew Dad her traditional kiss from the doorway...

Mom and Holly could not believe where he packed all that food!  It almost made them feel sick...they changed their plans to go to lunch, instead going back to Mom's house to visit.

I remember when my husband and I would visit his Mother and she would forget she had eaten and the fact she was full; going back for breakfast two or three times depending on how many of her friends she ran into who were on their way to the dining room...

My Mother in Law was in perfect health and like Dad, had a hearty appetite.  She ate voraciously until she had a CT Scan to determine why she was falling.  The hospital sedated her heavily because she could not remember to hold still during the test.  She was never the same...  She stopped wearing her wig and eyeglasses and dentures.  She kept her eyes shut, would not talk and refused to eat or drink anything...She died two month later. I hope Dad's health prevents him from such a fate....it was horrible.

Well, at least he's in good spirits, and what guy doesn't love a hot dog and chips :) Have agreat week.

We have a lady who always forgets she ate and want's to come back for more. It's a hard thing to deal with. Glad your Dad's appetite remains good. Alzheimer's is such a tough disease!