Mom and my sister went to visit Dad Sunday... Dad did not recognize my sister...  He was in "WWII combat mode", cutting off the heads of Boa Constrictors with a machete while hacking his way through the jungles, climbing palm trees, tossing hand grenades, fighting alongside John Wayne....and the planes were bombing regularly as they flew low over head.  Dad said John Wayne was shot while trying to raise the flag, but rolled down a roll to escape, only to be killed later on.  Mom thinks he may have had a nightmare, or had seen the film Iwo Jima recently....

Both Mom and my sister listened and stayed involved in Dad's stories...noting Dad's right eye was practically closed. Dad seemed to have more difficulty than normal in hearing either of them talk, so they nodded and smiled a lot. 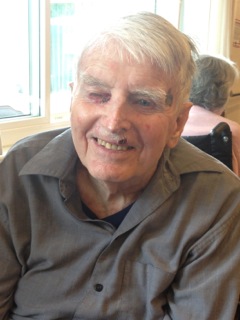 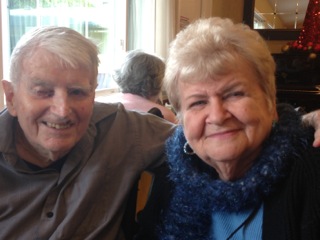 Dad with his lady love...Mom

I received a call from the nursing home yesterday, informing me the visiting Dentist placed an order to have one of Dad's teeth extracted.  I had spoken to the nursing home and have spoken to the gal at the Dental office, asking if they could clean out the tooth and place temporary fillings....but of course, Medi-Cal will not.  They pull rather than fill.

I used to work in the Dental field and just cannot fathom such disregard for dental health....but unless Dad is in pain, the last thing he needs is another open wound.  The male nurse who is one of Dad's regular caretakers, knew how we feel about pulling Dad's teeth and called me for permission to cancel the order. He assured me Dad is not in pain and has no problems eating.  Dad would not allow the dentist to even take x-rays, I know he would not permit an injection and never an extraction.  He still has all of his teeth.

Mom and Holly observed Dad's appetite for themselves when his lunch arrived... He had what looked like homemade chicken soup with fresh vegetables and big succulent chunks of white meat chicken with noodles, biscuit, diced beets, green jello with pineapple, ice cream, cookie, milk and coffee.  Everything looked and smelled so good, it made Mom and Holly hungry, so after their visit they headed for a restaurant for lunch, only to be caught in a hail storm.  It hailed so hard, my sister thought it would dent her car...but luckily, it didn't.

My sister and her husband just finished a complete remodel of their kitchen.  Thanksgiving their kitchen was totally gutted.... it was finished around 2pm on Christmas Eve, just in time for our yearly family Christmas Eve party.  We were all there, except Dad.  We each visit him separately... We start off the evening by putting names of famous people on the backs of everyone, even the children, and then have to guess who we are by asking yes or no questions.

We had a wonderful potluck dinner with everyone bringing something and my sister and her family providing the ham or pork roast...this year it was ham.  After we played our "white elephant gift exchange", which we all thoroughly enjoy and always brings a lot of laughter...

It was a lot of fun and just when you think you are out with no money....the person next to you passes you a dollar and you are back in.  If you have one dollar, you only roll one die. If you have two or more dollars, you roll both dice.

I ended up winning the first game and won $60.  After everyone left, 8 of us played and my husband Jerry won the pot of $24.  Everyone joked and said next year the "Vegas" people couldn't play... it was really a fun night.

The next morning, we spent at my oldest daughter and her family's home in Beaumont, joined by my youngest daughter, her fiance and their son Jacob.  My daughter made the family traditional "monkey bread" and then a delicious meal for lunch.  We opened presents, visited and enjoyed the day together. That night, my youngest daughter's family met us at El Torito near our hotel and treated us to dinner.  Jerry and I were fast asleep by 8pm.

Wednesday, we checked out of our hotel and drove to Irvine to spend the day and night with one of my husband's son's family and our two grand daughters.  The girls had some gift cards so we all went to Downtown Disney for them to shop and spend their "holiday money".  We enjoyed a yummy family style lunch at Stone Fire Grill.  We had so much left over, we took it back to their house and dined on it later that night for dinner.

Thursday we headed back to Riverside, to stay with Jerry's only daughter's family and see his youngest son, the Marine.  We laughed, talked and enjoyed a wonderful crock pot roast.

Friday morning we were on the freeway driving back to Nevada.  Normally, we celebrate with his daughter's family AFTER going to my sister's house on Christmas Eve, but we are always so tired, we decided to take an extra day and spend it with them instead.  It was so much better for all of us and we decided to do the same plan next year.

In the past we are rushing around trying to visit at two or three places per day and it is just too much stress.  We fight the California traffic, which is always worse around the holidays.  I feel very guilty I did not see Dad this trip....he has had a cough, I am just getting over a cold, and it was just too much running around.  I have attempted to call and talk to him, but have not been successful.  He has been in the shower, sleeping, eating, the staff passing out meds or he has been enjoying activities.

He has no concept of time and recall, and I know he is kept busy with holiday events and activities at the nursing home.  They always have extra music, food and entertainment and as much as he enjoys it, it also exhausts him as well.

We will be returning to California in February, so we will definitely see him then.

Hope everyone had a wonderful Christmas and a Blessed New Year to you all....

Happy New Year Donna! Sounds like you have been extra busy but with lots of fun things. Glad your Dad is keeping his teeth. Sure seems crazy to pull them if they aren't bothering him.

Happy New Year Donna, sounds like you had a wonderful Christmas with your family.

Happy New Year!
I can relate to so much you write, even though our situations are different. My Dad also has some dental issues. It can be so scary.
I am glad you have had a lovely Thanksgiving & Christmas.
Love to you♥

Wow! You have been on a whirlwind trip. Sounds like fun and making memories is what the holidays should be about. Happy New Year.