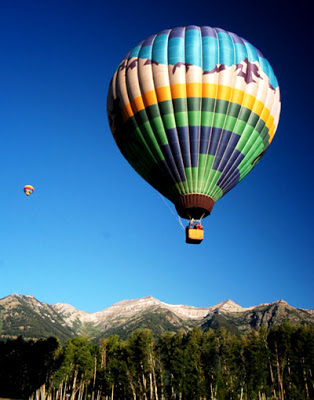 Mom went to visit Dad today.  She found him sitting up in his wheel chair beside his bed talking rapidly.  Dad has two room mates, one was fast asleep and one smiled at Mom as she walked in. His caregiver, "Angel" greeted Mom telling her Dad had just finished his shower.

Dad told Mom he was very happy to see her and had just returned from an incredible trip to Oklahoma on a speedy dirigible (only Dad called it a huge, fast balloon)...He had landed at the harbor in Oklahoma and the mountains were gorgeous!  He could not believe how fast the balloon flew. He also went down the main drag of Chicago and Broadway in New York. Dad never felt so much speed and there wasn't even any vibrations.

He saw my sister Holly in Pearl Harbor.... she travels all over the world doing her thing...  Dad said he had been in Pearl Harbor for four years....right there in the harbor. There weren't any bombs or anything.  "I'll be on the moon this time tomorrow, the balloon is so darn fast!"  Mom could only looked wide eyed at Dad, smiling at his enthusiasm and nod her head...

"The last time I saw B_____, (my oldest brother, who lives in Ohio with his family) he was going out one of the windows at 1446 (where we used to live with our grand parents when we were very little, before we moved to Washington state...) with a bloody head.  He drove himself on a scooter down to the big hospital on Green Street....Mom interjected, thinking the name of the street was Congress Place...Dad told her, "whatever..." and continued on with his story....

"I have had no connection with the boys since you passed away..." (Mom looked perplexed as she quickly jotted down notes to keep up with Dad's imaginary adventure... Dad has been telling Mom lately how shocked he was to see her alive because he thought she had passed away...apparently, he is still thinking it is true...)

Dad went on..."I am 53 years old and taller and wider than I have ever been.  I feel so good! The dirigible sped down the streets of Chicago (where Dad lived as a child) so smoothly I could not even believe we were moving! It was so amazing!! I saw the building out there in Oklahoma, huge mountains...... what a wild place... and very exciting!"

"A lot of people went with me...we had a great time...I have never weighed so much or been so tall....I just feel so GREAT!"

"All the houses on our old street in Pasadena are closed and shut down.  Same with Monrovia....the people were too scared to be that close to the freeway..... Don't go near the schools either....you will get shot! Whoever dreamed up the evacuation of the cities was nuts..."

"I gave a speech today on the loud speakers in the ceiling... The nurse is going to cut off the blister on his foot (Dad has a large skin cancer growth on his left foot)... The doctor is taking up a collection from all the nurses...."

"My friend has a personal problem...  he yells at the nurses....  I call all the young nurses "sweet peas"....because they are so sweet and hard working..."

"I own everything on the island there....it was my second trip....I received extra pay for my help with the war situation, but I won't fight any more...I let it go.... I don't go outside any more....( Dad made his crooked, rheumatoid fingers like a gun, pointed it and made a gun shot sound...)

"The boys think I talk too much.  I didn't want to make a second choice with my own kin.... There are a lot of crooks out there..."

"Holly (my sister) wears a furry thing around her face when she interviews people all over the world... "they" offered him a new car, which would be nice when I go to Pasadena....a nice red truck like E_____ has..." (None of my brothers have ever owned a red truck or car...my brother E____ has a silver truck.)

Mom could smell the lunch carts coming down the hall.  One of Dad's favorite care takers, "Doctor-Doctor" walked in with Dad's lunch.  Doctor-Doctor told Mom how Dad had told her about the balloon ride to Oklahoma earlier this morning...Mom sat and chatted with her and Dad for a few more minutes, then kissed Dad and left.  Her head was spinning from their visit and his imagination....

Mom figured he had watched some programs on TV about Pearl Harbor, since yesterday was it's anniversary. Dad does sit in the TV room quite often, so I am sure whatever he picks up on the TV adds to space travel in his dreams.  Dad has always has had a vivid imagination... I bet he dreams a lot of it... I too have a vivid imagination and have travel dreams...whatever it is....when he is up, up and away, it agrees with him....excites him...and makes him happy...
Posted by Donna B. at 7:50 PM

That was a great adventure! I love these kind of reports. :)

Imagine his excitement. What a wonderful trip.

Hi Donna, just wanted to let you know that I am still following your blog. I think it is great that your Dad is having such wonderful adventures. Hope you have a wonderful Christmas.

Your dad goes on wonderful adventures. I love when his adventures make him happy. Bless your mom for all she does. You have a wonderful family.