Mom and my sister Holly went to visit Dad yesterday.  They found him in the dining room wearing a new baby blue velour jacket and pants, a gift from Doctor-Doctor (one of Dad's favorite caregivers).  Dad looks great in blue.  He was happy to see them both and recognized my sister, calling her his pet name, Holl Doll.

Dad's lunch of turkey, stuffing, zucchini, beets, watermelon, wheat bread and butter, coffee, milk and ice cream.  He scarfed up every bite leaving nothing but shine on his plate...

He leaned over to my sister and whispered to her, "Can you tell me why I am here?"

Holly told him he was there because it is the very best place to take care of him.

Both Mom and Holly complimented on how nice he looked in his new outfit.  Doctor-Doctor explained to them how Dad had admired someone else wearing a similar outfit, so she bought him one.  Very sweet of her.

Mom, Holly and Doctor-Doctor continued to chat with Dad.  Doctor-Doctor coaxed Dad to sing Ava Maria, which he did in full voice.  Dad did great the first couple bars then he made up his own words... "I want you, I want you"....

Of course they all had a long laugh and Dad joined in the laughter...my sister took the opportunity to take his picture in the midst of laughter....(see below) and also videotaped him singing... 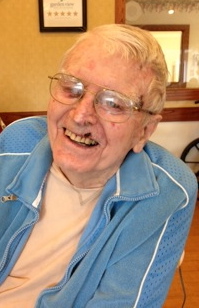 I would love to share the video my sister took, but a woman is in the background and I would not want to post some one's loved one without their permission.  I was able to crop her out of this picture.

One of the other female residents, who frequently yells, pulled off her shirt, exposing herself...while the staff struggled with her to cover herself, non of the other residents seemed to notice or even pay attention.  Apparently she does it so often it has lost its novelty...

Dad didn't miss a beat and prided himself on how nice the windows are and how well he keeps them inspected...and having more money than he can count on in Chicago...

Both Mom and Holly felt good with how happy Dad seemed and told them both how great he felt.  He insisted he had no pain and felt fantastic.

Dad's doctor is going to attempt the liquid nitrogen again...and consult with a surgeon as well regarding Dad's left foot.

The Hospice nurse sent me a photograph on my cell phone of Dad's foot. I was very shocked.  It looks so much worse than when I last saw it last May...  I asked my brother K_____ if he would not mind looking at it because I needed reassurance and a second opinion from family that we are going in the right direction.

He was shocked too.  He agreed we have to go with what Dad's doctor and the surgeon recommend.  If they say Dad needs amputation of his left foot...and we don't...it will only be a short time before infection sets in...I am amazed it has not become infected already.  A tribute to the care and attention Dad receives at the nursing home.

We stay united in prayer and know each day, each moment we have Dad is a blessing from God.

Lovely happy photo of your dad, Donna. So pleased that your mum and sister had a good visit with him. He certainly hasn't lost any of his appetite!!

Your Dad's place really is a good one. When staff cares enough to spend there own money, you know it's more than a job. Love that picture of your Dad laughing.

Bless you and your daddy too.

Such a great and inspirational blog.
I write and maintain a blog which I have entitled “Accordingtothebook” and I’d like to invite you to follow it.. I’m your newest follower.

It sounds like they had a wonderful visit. Seeing him so upbeat and happy must have given them great joy!