10-20-11 Received a call from the nursing home:  Dad had lost 8 pounds the month of October.  They will be giving him a supplemental drink twice a day.  I tried to talk with Dad.  I could hear him perfectly, but he kept telling me he could not hear me.  Doctor-Doctor said she could not hear me either, so I know it was not Dad.

He told me, "I know you are calling to tell me how much you love me.  I love you too dear...I am sick and throwing up, but I am doing just fine..."

After I hung up, I called back to speak with the charge nurse.  I told her what Dad said and asked if he had been throwing up.  She assured me he was fine and they had no record of him throwing up.  I told her about the phone and she promised she would call the maintenance to check the phones.

10-25-11 was Dad's Care Conference:  Mom's friend drove her to the conference and helped Mom with her walker.  They both went in to visit Dad, but he was asleep.  The nurse said she knew Dad would want to be awakened, but Mom's knees were starting to really bother her, so they left.  Mom said the report was all good and despite losing the 8 pounds, he is still in his normal range for his height and age.

10-28-11 Received a phone call from the nursing home regarding Dad's roommate having a contagious rash.  Both Dad and the third roommate would have to be treated with some special antibiotic cream.


10-29-11 Called the nursing home and spoke with charge nurse.  I wanted to know if it was safe visiting since I was staying with my daughter and did not want to take any chances of exposing my young grand sons to the rash.  Two of the three boys have very sensitive skin.  She advised me to wait until the following Tuesday, giving them 4 full days of the treatment.  I explained I was going home on Tuesday.

Instead, I called my sister and we decided to take Mom to lunch.  I gave Dad's card to my sister as she plans on seeing him on his actual birthday when he turns 91.  We met at Mom's and took two separate cars to Islands restaurant.  Mom has been using the walker my sister bought for her.  She tried to walk three feet from the chair to the couch and almost tripped.  Her knees keep feeling like she is having electric shocks.  She will be going to pain management classes and to have an MRI.

When Mom and I returned back to her house, I asked if she was using her Life Line bracelet or necklace.  She informed me she had not been able to activate it yet because she was still looking for a good place to hide the front door key.  The police and fire department need to know where there is a key hidden to get in should there be an emergency.

She also was having problems with her computer and some other small things she needed help with.  We resolved all her issues and I left her house about 6pm and headed back to my oldest daughter's home.  She had made spaghetti and garlic toast, so I was anxious to get there...

11-3-11 My youngest brother E went to visit Dad for an early birthday visit. When my brother walked into the dining room, Dad greeted him by calling him the oldest brother's name.  E____ corrected him and Dad told him he loved him. Here is a picture of Dad opening the card he gave to Dad: 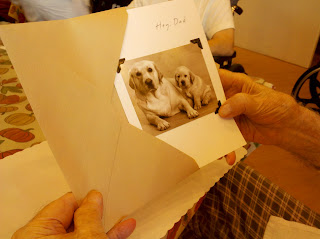 My brother E____ has a golden lab and three Havanese dogs.  Dad was very close to them all, but knows the yellow lab is getting older and having some health problems.  One of the Havanese is particularly protective toward the lab and they sleep together and the smaller dog grooms the lab.  The picture is the two of them together.  Dad loved the card...

Shortly thereafter, Doctor-Doctor arrived with Dad's lunch tray.  When Dad saw it was liver and onions he decided he was not hungry.  He began to warn my brother he might throw up.  E____ took it in stride and went and got him a basin bucket, just in case.  E____ suggested Dad drink his milk and mashed potatoes to settle his stomach, and told him he would be OK. 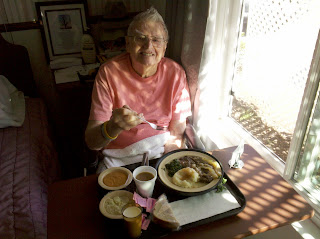 Dad said he had to throw up, because if he didn't something might happen... my brother used positive thinking and just told Dad he would be fine and he did not HAVE to throw up.  Dad agreed it was a great idea and a positive perspective, announcing he felt much better.  Doctor-Doctor brought Dad a nice assorted fruit plate with cottage cheese, and Dad quickly scarfed it up.

To use my brother's description, they "rip-rapped" for an hour or so until Dad let him know he was tired and wanted to take a nap.  They exchanged love and hugs and my brother left Dad's room.  As he walked up the hall, he noticed an older man sitting in the doorway of his room with his white bathroom open down to his waist.  As my brother approached, he noticed the man was "bursting with golden showers" all over his bathrobe and the hall way floors....

The nurse was right behind my brother so when he turned to check if she was still there, she was already attending to the gentleman.  We all have had similar experiences visiting the nursing home.  It is not pleasant and if one allows the surroundings to get inside one's head, it would undoubtedly affect one's frequency of visits.  We simply have learned these past two years, to take it in stride...
Posted by Donna B. at 5:58 PM

Sorry to hear your Dad is losing weight. I hope the supplements help. I do agree with his assessment of liver and onions! :)
Your poor Mom is having her share of trouble too.
Did they tell you what this rash was? It sounds pretty unusual to me.

Your dad certainly is surrounded by love and thank goodness for Doctor-doctor :)

Hi Donna. I've missed you, although I see that you did pop over to say 'hallo', which was kind of you. I'm so sorry that your poor mum is suffering with her legs at the moment. Such a shame, and all because of that fall. I agree with you about thinking about the surroundings. You really have got to try to put it out of your head and just concentrate on visiting your dear dad. He must be very strong still, to have reached his 91st birthday. Take care dear friend.