A Very Special Happy Birthday To Me...

My youngest brother E___ went to visit Dad today... The main lunch room is still under construction.  It is being painted and the floors are being changed.  He had to hunt around for Dad and finally asked one of the nurses where he was.  The nurse directed him to an activity room, where they have made it into a lunch room...  Dad had just been wheeled out into the hallway, after finishing his lunch, when my brother approached...

Dad was very excited to see him, and reached to him to give him a big hug.  My brother decided to wheel Dad outside, to the front of the building.  Fresh flowers had been planted and we all know how Dad loves bright, cheery flowers...  My brother settled on the bench and faced Dad toward the flowers so he could enjoy them... 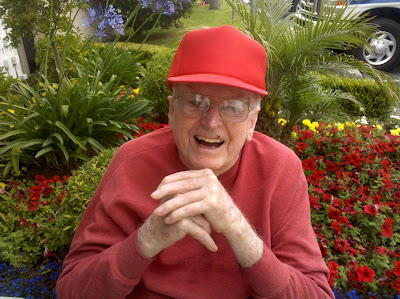 Dad was full of joy and complimenting about the weather...how beautiful it was outside.  It was close to lunch time, so there was heavy foot traffic, visitors, doctors, nurses, staff, coming and going...each time someone would pass, Dad would smile, say "Hello", or strike up a conversation....E____ would join in too...

My brother's birthday was two days ago, and mine is today.  E____ told Dad about his birthday and asked if he remembered whose birthday it was today...first he guessed it was Mom's...then he guessed mine.  E____ asked if Dad would like to talk with me.... so my brother called me on the phone and told me there was someone who wanted to talk with me...

I had talked with my brother that morning and we had a long conversation about our dogs...my brother has four.  For a minute, I thought he was going to have one of his dogs talk on the phone to me...because one of them is very vocal and talks often when we are having a conversation...

I am standing in line at Walmart, returning something...and as I wait, I suddenly hear my Father's voice, singing at the top of his lungs, in full singing voice, singing me Happy Birthday!  I tell you, it MADE MY DAY!!!!  That was one of the sweetest things my brother has done for me...    We chatted a bit and then I told him I would see him in a few days and to enjoy his visit with E____.

As they sat out front talking, a woman parked by the fire hydrant and ran into the nursing home.  Shortly after, a police car pulled up and was ready to write a ticket.  A nurse parked and went to the officer and asked if she could go get the woman so she would not get a ticket.  He allowed her to get her.  Moments later, she came rushing back out and moved her car. My brother and Dad discussed how nice it was of the nurse and the Police officer to not give her a ticket...

My brother was curious about some of Dad's memories in the Marine Corps.  E___ began by asking Dad what rank he had been.  Dad told him he was a Corporal and in charge of the anti-tank guns.  I know Dad was also a sharp shooter... but we will have to confirm the rest of what Dad said with Mom...  He said he was on the island for the battle of Tarawa for five months.  They had to stay to guard the island and wait for the exchange with the Army....

Dad said the Marines came over to the island on the USS Wharton...He talked of all the coconuts up in the palm trees and how the rats would knock them out of the trees at night...  He spoke of how the Japanese dug in deep and hid in concrete shelters.... When they were captured, they used to walk in surrender position, with their hands behind their heads....but were hiding grenades.  They would wait until they were in the midst of several Marines, then pull the pin and kill the soldiers and themselves...

He could not remember the name of the ship he sailed to Hawaii...he stayed below deck most of the time... They went to Honolulu to inspect the damage at Pearl Harbor...

E___ asked what his best memory was from the War... Dad said when they were on the aircraft carrier, coming into San Francisco harbor... and he could see the Golden Gate Bridge...and all the people were lined up along side the shore, saluting, cheering, clapping and hollering.  Many of the Marines tossed their hats into the air... He said he felt so good and it was his best memory of the War...

When he came home, he did prison duty and guarded the prisoners in San Pedro, CA.... he dressed in his greens...

Dad asked E____ how his business was coming along...so they discussed my brother's business for a while...

Dad was looking tired...probably relaxed from sitting out in the sun.  My brother wheeled him back to his room, gave him some love and hugged him good bye...

Happy Birthday Donna! (a day late)
It was so sweet of your brother to do that. I can imagine the smile on your face when you realized who was calling.

happy belated birthday Donna! What a wonderful gift you got to hear your dad sing you happy birthday! Sounds like he and your brother had a great visit! Neat that your brother talked with him too about his war experiences and what his best experience was with it; I can imagine it was breathtaking to be pulling into the harbor and seeing everyone cheering you on!

(this came through on my Dashboard :)

It was your birthday? I´m sorry I missed it! Happy Birthday and may there be many more. God bless you!
Glad to hear your dad is doing so well.

Donna....I so love to read the stories of your dad. You are so blessed to have had such father! I live vicariously through your stories. They are wonderful!

Your Dad has some wonderful stories! I wish I had asked my Dad more about his life before us kids!

That is a wonderful Birthday! And the picture of your Dad is Fabulous...what a grand smile :) It is interesting how some stories stay with us so strong while others do not. Especially with Alzheimers.
Happy Birthday my dear friend..
I pray this year will truly be a wonderful Blessing for you♥
Love Janis