We drove from Henderson, Thanksgiving morning and arrived at my oldest daughter's house around 1:45pm.  My two grand sons, ages 6 and 8, wanted us to play 'hide and seek" as soon as they opened the front door.  My youngest daughter's boyfriend was deep frying the smaller turkey in the backyard.  My youngest daughter was changing the baby's pants.  As my husband walked up to him, the baby smiled a big smile at him and stiffened his legs, making diapering a real challenge for my daughter. 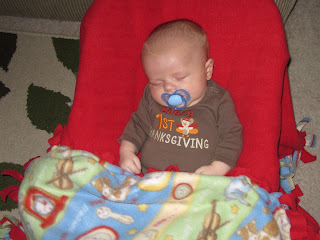 Glancing into the kitchen, I see the 23lb. "Cristina Ferrare's" turkey my oldest daughter cooked, cooling on top of the stove.  It smelled delicious and filled the house with memories.  It is our family favorite seeped in years of family tradition. I ask where my oldest daughter was and Jodee, my youngest, told me she had a bloody nose and was lying down with an ice pack....as I walked down the hallway to her bedroom, I could hear her husband in the garage telling his Mother, who had just arrived the same time he did, he had to return to work. My son in law works for Verizon and some woman had a tree fall on her lines....

As I pushed open my daughter's bedroom door, there she lay with a Lightning McQueen ice pack across the bridge of her nose.  She had been carrying chairs into the house from the garage and did not clear the door jam, which stopped the chair and bashed her in the nose!  It looked like it hurt like hell, which she confirmed.  I attempted to pamper her and she would have none of it.  Being a Mother of two wild little boys, she is one tough, amazing woman... I tried to tell her to go the doctor, but she was already on her way back to the kitchen...

Traditionally, my daughters take on Black Friday like two shopping Ninja Warriors.  They plan their mission for weeks ahead, both on top of all the secret websites leaking the slashed prices and deals of the century, long before the ads are even printed. They schedule an early dinner at 2pm so they can have lots of turkey for the men to eat when they are gone ALL DAY SHOPPING...

My husband and I alternate between Nevada, my daughters and the family celebrations each year in California. I called my Mom, brothers and sister and their families, who were all celebrating at my second to the oldest brother's home, to wish them all a Happy Thanksgiving. I could barely hear my sister or understand what she was saying, because she was laughing so hard.  Apparently she found an app on her phone for various fart sounds.  There is a defect in our family's DNA to find hilarious humor in the art of farting...My brothers and brother in laws were experimenting with various family members as they proudly shared the different styles of farting on this app...

I hung up as every one was gathering in the kitchen, slicing up the turkey, setting the table, serving up the vegetables, the rolls and stealing a piece of turkey here and there...soon, the nine of us were crammed around the table for six.  The 6 year old announced we were going to pray.  I asked him to start us off....

"First, we close our eyes", he instructed,

"And then we say the words...thank you Jesus for all this food and God Bless us all..."

(despite his instructions to keep my eyes closed, I had to peek to enjoy his cuteness...)

After dinner, my son in law left to return to work, the boys were off and running, climbing all over Grandpa, wrestling and laughing. The other Grandma did her best to referee. The boyfriend took his turn to nap as he is watching baby Jacob while the girls shop Black Friday.  The girls adjourned to the front room where all the ads were laid out as they strategically made their shopping lists for their early morning attack...

The baby was sleeping and I did the dishes.  The 6 year old came crying to me with a sore ear complaining Grandpa hurt him.  I gave him a teddy bear ice pack, kissed his ear and told him if he was going to play with the big dogs, he has to expect some bumps and bruises... I had barely finished my lecture, and he had launched himself into the air, aiming for the back of my husband/Grandpa's head...

The baby woke when the boys both were squealing for mercy as Grandpa had them both in the deadly finger lock...and Grandma yelled at the Cowboys on the TV who allowed the Saints to score...

I scooped my my precious baby Jacob and rocked him in my arms, patting his little bottom with a rhythmic pat...soon he was sucking his Binky like Maggie Simpson and drifting back to sleep as his eyes rolled back into the top of his head... 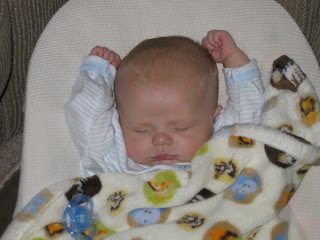 Jacob's mommy says this is his "roller coaster" pose when he is really relaxed.... usually a big, long stretch precedes this pose. :)

All was well in the chaos we know as our family...I sat and surveyed the craziness and commotion and smiled with love... Happy Thanksgiving everyone...
Posted by Donna B. at 11:23 PM

it sounds like it was a wonderful Thanksgiving! I admire your daughters for their adventurousness to go out shopping the Friday after Thanksgiving!

It sounds like the perfect day - minus the injury to your daughter! :)

It sounds like you had a true family Thanksgiving. It was much the same here with some additional extended family and no bloody noses.
My daughters went shopping early on Black Friday also, but I don't think they put as much planning into it as your girls did. They did get some good bargains.

In other words, your Thanksgiving dinner was perfect!!!!! Great post!

Sounds like a wonderful, crazy, loving Thanksgiving! Thanks for sharing it with me!