Packing up Dad's Things and Remembering. Weekend in Laguna and Visiting Family.

I just returned from an extended trip to California.  I helped Mom with some heavy cleaning around her home and we sorted through all Dad's clothes and things she still had in the garage.  We donated most of it, but I kept three of his handkerchiefs.  I gave one to my sister and I kept two.  Dad ALWAYS carried a handkerchief.  I can still remember his sneeze and the way he blew his nose... Makes me smile just to think of it...

I took some of his shoe-stretchers for my husband, a letter opener and the noisy cow bell Dad used to hang from the front door when he lived at home.  He was so paranoid about someone breaking into the house. He was sure that noisy thing would startle any intruders and would certainly let him know trouble was in progress.

We still have so many of his books in Mom's office.  Dad had made book shelves in the closet to store some of them.  He had old college class books from Cal Poly on Mathematics, Science, Botany, Fertilization, Drafting, Design; books on Chess, Nature, Gold Mining and lots of  How to Fix It type books.

Mom still feels too disrespectful to get rid of them because Dad always held his books with such high regard...

One of the chores I did for Mom was to trim the Pomegranate tree outside her back porch.  I started that tree over fifty years ago when I used to steal the fruit off a neighbors tree, bring it home and sit on the back porch, spitting out the white part of the seeds after I had eaten the juicy red parts.  The tree is huge and produces so much fruit.

Mom sat on the patio and kept me company, often telling me to stop and rest...which I ignored.  I was using one of Dad's old Loppers, which had not been sharpened in several years.  Mom said I grimaced the same way Dad did when he trimmed it.  I told her I felt Dad was with me, helping guide me as to what branches to cut and which to keep.  I really did.

I have fond memories of Dad and I working in the yard together...he would always start by telling me the plants technical name and then it's common name.  He would tell me how much water to give it and how to trim the leaves, as if he were talking about a child I needed to know about when I babysat.  Some how he always made me feel like we were doing something so important and doing it with honor for living things.

He had me talking to the plants and feeling perfectly sane in doing so.  Later, after I moved out into my own apartment, I would leave classical music on for my plants.  I am still convinced it is why they all flourished and grew so big and healthy.

I attended one of my son in law's Mother's Memorial.  She battled cancer for over a year and died early Christmas morning.  It was a wonderful service.  My son in law and one of his dear friends worked on an extremely moving video of her life.  Very emotional.  A young 9 year old girl, unrelated to the family, other than friendship, had adopted Me-Maw (as all the grand kids called her) as her Grandmother-Me-Maw.
She wanted to sing a song in her honor and sang, In the Arms of an Angel.  If the song was not enough, her voice was like an angel, and there was not a dry eye in the entire room!

I spent a couple days with my youngest daughter, son in law and my three year old grandson....who was constantly reminding me of his baby sister residing in his Mother's belly and how she will be here soon to play with him...They had all been sick with the flu after the Memorial and my daughter was due to have her shower for my first grand daughter the day before I was to leave.  I said a prayer to keep me healthy and not to have my back go out as I disregarded all warnings by family members to not go because I might get sick.

I am happy to say, my daughter and son in law were able to get plenty of rest so she was able to attend her shower and I did not get sick or throw out my back.

I also visited my oldest daughter and my three grand sons.  Can you believe the 9 month old is walking already?  Or should I say, running?  And on his tip toes??  He has a rough time cutting teeth and constantly grunts to communicate.... He sounds like a little cave man, or a baby bear or elephant.  Once in a while he lets out a squeal...a laugh...usually when one of his brothers come into the room.  The older brother is 11 and the younger one is 9.  The baby just lights up with both of them and they get the biggest charge out of the little guy.

It was so good seeing everyone...I miss them so much.  I am grateful I am only 3.5 or 4 hours away instead of having to hop on a plane and fly to them.

Mom, my sister Holly, my youngest daughter and I had all planned to spend Martin Luther King weekend in Laguna Beach at the Pacific Edge Hotel.  Since my daughter was still sick, she did not get to join us.  We had a wonderful, relaxing time, but decided to come home one day early because my daughter felt so bad missing the weekend she insisted on still paying her portion.  By leaving early, we paid a little bit less than what our portions would have been if she had come.

My sister and I took a long walk on the beach, taking pictures and walked quite a ways.  There were several people walking their dogs on the beach, but on our way back, I noticed a woman walking a huge, white wolf.  I brought it to the attention of my sister and she did not believe me.  Sure enough, it was a rescued wolf from a sanctuary in Lucerne Valley.

A few months ago, I had been to a Meditation class.  I was particularly focused on wanting to connect with my Dad.  Instead, I got a visit from a big white wolf who guided me through the woods, lush plants and flowers to a clearing on a bluff above the ocean.  I sat with the wolf and enjoyed the view.

I asked the woman if the wolf had a name and she told me his name was Journey.  I got goose pimples thinking of my white wolf vision and the title of my blog being Mystical Journeys... It gave me such a good, peaceful feeling, as if it was destiny. 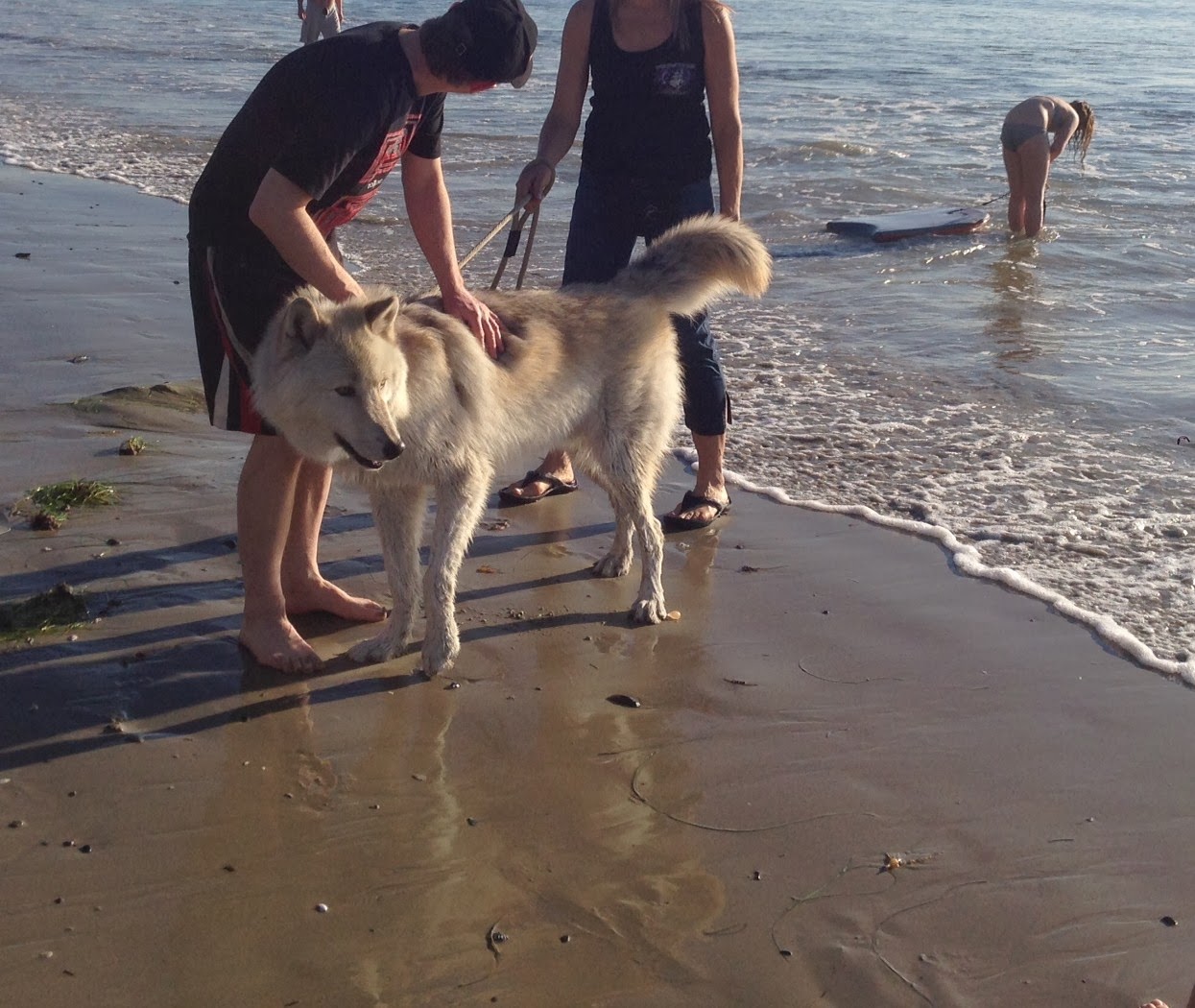 Hi Donna! I enjoyed reading about the garden work and the memories of your Dad while doing it. Glad you have some of those special things like his handkerchief to keep with you too.
What fun with your girls, Mom and grandkids! As I read about them I was thinking how your Dad would have enjoyed the fact that you were all spending time together.
The wolf story is so neat - and what a gorgeous animal!

Wow, his name was Journey. More than coincidence.
Glad you were able to help your mom clear out some things. That must be wild to see that tree knowing you planted it all those years ago.

I was thinking about you the other day, wondering... And I am so glad I found this today. Clearing out is a difficult process, but can be one that also cleanses inside and connects us. I'm glad you were there, and the wolf vision... visitation... the connections there. Wonderful. Take care, please.