The plan was for all six siblings to come together with Mom and go rally around Dad for Father's Day. We all were to meet in front of the nursing home at 11am.  We all arrived except for the second to the youngest brother, S_____ who woke with either "pink eye" or "conjunctivitis".  He did not want to take the chance of infecting Dad or any of us...

Two of the brothers went to Dad's room to bring him out front so we could surprise Dad.  The brothers returned announcing Dad was getting his shower.  We all sat and chatted, catching up and celebrating having our brother B____ from Ohio here with us.  I think it has been about 9 years since his last visit.

Before too long, the brothers returned for Dad and wheeled him out onto the nursing home's front, shaded patio.  Dad was very happy to see all of us, knowing we were family, but not calling us by name.  He would say "my son".....to the brothers, or "this is a very important person to me"...

Dad called me "Holl Doll", despite me correcting him and telling him I was "Donna"....Dad told me, "I know, that's what I said, Holl Doll"....  My sister comforted me telling me Dad usually calls her "Donna".

We posed for various pictures with Dad...

Mom, Dad and brother B___ from Ohio 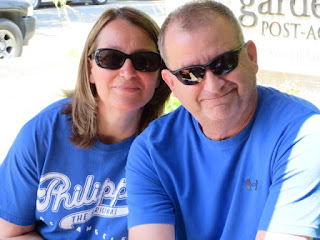 
Five out of the six kids, Mom and Dad

After photo taking, we each took turns reading Dad our cards to him.  Dad struggles reading, especially with his one eye closed with cancer, and not wearing his glasses.... Light makes his eyes even more sensitive.  One of the brothers returned to Dad's room to get his sunglasses.

The youngest brother E____ had been inspired to read a poem he wrote to Dad.  It was very moving and made several of us cry.  He also blew up a picture of his three white Havanese dogs, with a bubble above each dog's head with the message, "Happy Father's Day"....  Dad held the photocopy up close and kissed each one of the dogs.  So sweet.

Dad's Hospice CNA came out and stopped to tell us he was so concerned with how Dad had been most of the week...and so surprised to see how Dad perked up when we came to visit with my daughter Jodee on Friday.  Dad's appetite jumped from 60% to 100%.  I had not met the Hospice CNA so I hugged him, thanked him and told him he was an extension of our family.  Others in the family who had not met him, introduced themselves.  The CNA put his arms around Dad and wished him a very happy Father's Day and waved goodbye to all of us.

One of the nurses came out front and invited us all to come in the back courtyard as they were having a BBQ.  We all gathered behind my brother B_____ as he wheeled Dad through the nursing home and into the back courtyard.

Dad wanted a big hot dog with mustard....so I went to the Activities' Director, who was doing the cooking, and asked for a hot dog.  "Sorry, we are just doing burgers, chips, sodas and baked beans...we'll have hot dogs on the 4th of July."

I took a hamburger with lots of mustard, some relish and a little ketchup back to Dad, along with some baked beans and chips.  Dad was already sucking on a soda with a straw.....which he had drained!  My younger brother had given Dad a Coke.  I figured we should steer Dad away from the caffeine so the next soda I gave him was a Sprite.

Dad was anxious to eat his "hot dog" and I was attempting to wait for my brother to bring me a knife to cut it in half and Dad would not wait....he began grabbing at it...so I had no recourse but to hold it up for him to eat.  Dad almost bit my fingers as he growled and took a huge bite.  I cautioned Dad not to take such big bites, but he totally ignored me.  I was doing good if I could get him to finish chewing before he growled and took another enormous bite! 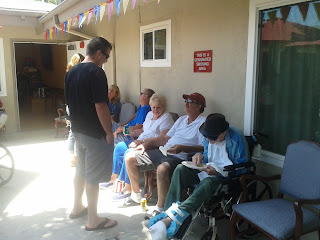 Dad polished it off along with another soda and asked for another....so while I went to get Dad another hamburger, my brother B_____ fed Dad some baked beans.  I think Dad ate two bag of chips and three sodas in addition to the two hamburgers....and still wanted a BIG HOT DOG WITH MUSTARD!

Ever humorous, brother E____ quipped, " Dad, you're gonna' have to wait until the 4th of July for the big dogs with mustard...just a couple more weeks."

I noticed Dad slowed down on his last few bites of hamburger...  He also started to droop in his wheel chair...a definite sign he was full and ready for a nap.  Dad confirmed he was ready for bed when I asked....

While my brothers, Mom and sister were saying their good byes, I slipped away, back to Dad's room and hung his cards on his "wall of love" (where we hang all our cards, photos, notes, letters, etc on the walls around his bed.)

My brother B_____ , Mom and I wheeled Dad to his room....B____ wanted some alone time with Dad to say his good byes as he fly home last Monday morning back to Ohio.  Mom and I visited with the nurses until B_____ came out of Dad's room.  I went back in to give Dad one more kiss....and Dad asked me as I leaned down to kiss him, "Where is my hot dog with mustard?"

My sister and her husband invited everyone over to their house in Claremont for a Father's Day BBQ at 2pm....so the party moved to their house...eating...laughter....conversations....great food and merriment continued... 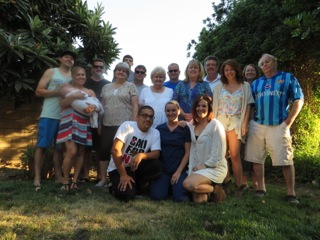 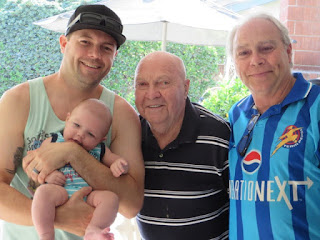 Four generations:
my nephew (Holly's son) and his 3 month old son, his grand father and father 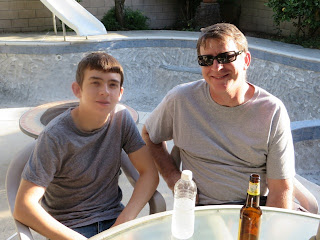 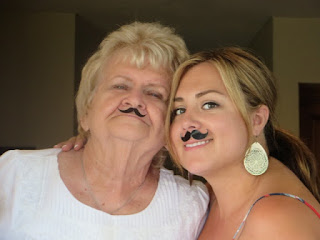 Mom and nephew's wife posing with stick on mustaches 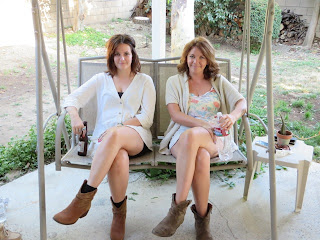 Yesterday, my sister sent me all her photos and discovered one of them made us all comment and laugh...  Dad has always had very dry skin and scratches himself constantly.  The wound care nurse at the nursing home does an excellent job of caring for Dad's skin and keeping it greased up with Aveeno, Aquaphor, and Vasoline....

The Hospice Nurse obviously was rushing to get Dad dressed so he could join us on the patio and did not put lotion on Dad....We all stop Dad from scratching his skin (which is so thin and bleeds) so the picture below is Dad taking advantage of itching himself...when everyone was distracted taking the picture... Classic! 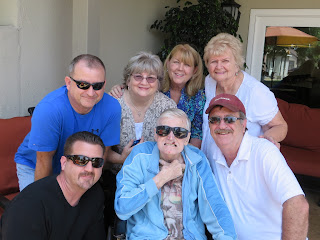 Dad taking the opportunity for a forbidden scratch....you just gotta' love him!
Posted by Donna B. at 12:20 PM

What a wonderful visit with most of you there. I really like that last picture of all of you.

Glad it was a good day and hope your father gets his hot dog soon.