Got a good report from the Hospice nurse today...Dad was in activities when she visited him.  He was very upbeat, polite and flirty with her, answering everything she asked with, "Yes, Mam".  All his vitals were good, but he told her he had pain.  Dad could not explain where it was....and when she inquired further, Dad told her someone told him he was in pain.... I will have to follow up on that...The nurse told me she called Dad's doctor and let him know.  The doctor prescribed 5/350 tab of Vicodin for pain as needed.  I asked if it could be taken with his Lexapro and Namenda, and she assured me it could.

My daughter Jodee and her Fiancé Jeff are engaged and will be getting married July 20, 2013.  They had a photo shoot for their 'Save the Date' photo and other photos for their wedding. Some of the pictures have their son Jacob in them, but during the shots of just them, her sister, my firstborn daughter Holly and her sons kept Jacob entertained...

I don't usually show pictures of or mention the names of Holly's sons, the ten year old and the eight year old...  Holly prefers I don't.  Holly is expecting her third son, my fourth grand son this month... 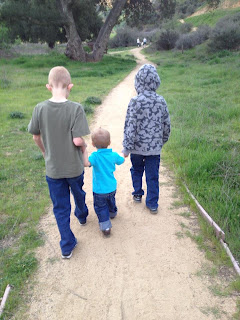 I did however, get the OK to post the picture above of the ten year old, Jacob, Jodee and Jeff's son, and the eight year old walking ahead of their Mom at the park where the photo shoot took place.  The boys always look forward to getting together and enjoy one another so much....  I just LOVE this picture.

My only sister Holly (yes, my daughter Holly is named after her Auntie) arrived today to visit for a week.  She and I will drive back together to California to attend her daughter in law's baby shower on the 10th.  I will be staying with my Mom a few days and then return home to Nevada on the 12th.

Have a good week everyone...I KNOW I WILL!!!

That's such a sweet picture!
Glad to hear your Dad had another good day. I wonder if he was focused on pain because he was asked about it. I know we have to check on pain every shift, plus there are quarterly pain assessments and with his dementia he may have zeroed in on it.
We give Vicodin for pain too and most people tolerate it very well without side effects.

You sound so upbeat. I am happy for all your good news. I love that photo of the kids. It could be a writing prompt. Enjoy your trip.

Good news about your dad. The photo of the children is so sweet. Hope you have a wonderful time on your trip.

Alzheimer's is a heartbreaking disease and I admire you for your way of dealing with it for your father.

I wish the best for you and your family. You have a lovely blog.

"Mystical Journeys" has been included in the A Sunday Drive for this week. Be assured that I hope this helps to point even more new visitors in your direction.

A fun sounding family week. That's the sort I like too.