Four Truths and a Lie...

I want to thank Donna at Donna's Book Pub for sharing the following Memetastic Award with me: 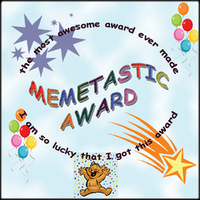 This is going to be a challenge, because I am a real lousy liar...

I must tell four truths about myself and then one lie.  See if you can guess which one is the fib...

*** I have worked on a production line making radios, as a dental assistant and office manager, as a food server, cocktail waitress, medical assistant and office manager, nanny, babysitter, receptionist for a law office, executive secretary for a bankruptcy law firm, a commercial artist for a radio station, a go go dancer, a sales person in a hosiery department for May Co,  a medical transcriber, home maker, a liaison for cardiac rehab and physical therapy patients, did clerical work for the Lung Association, clerical work for a city government, an intake clerk for a federal bankruptcy court.  I also had my own calligraphy business, submitted several children's stories for publication (but was never published),   I worked as a hospice volunteer, volunteered as a candy striper at a hospital, an usher for a theatre in the round, volunteer fundraiser for schools, volunteer Girl Scout leader and assistant leader, volunteer computer monitor, volunteer blog teacher, mail clerk within a federal court, telephone operator within a federal court, court recorder within a federal court, calendar clerk for a federal court, operated various office machines, copy, recording, transcribing, fax and scanning machines.  Archived, purged, organized, various filing systems in medical, dental, and governmental settings.

*** On several occasions, I knew what it felt like to be a victim of a crime.

*** I was part of a first response to someone in an emergency situation.  I held him in my arms and felt his blood stop pumping when he died.

I would like to share this Award with anyone who reads my blog and strives to be the best you can be...

Thank you again Donna, I really appreciate your thoughtfulness...
Posted by Donna B. at 2:06 PM

Congrats on the award!
I'm thinking you must be a good liar, because I can't figure it out. My guess is the Palomino story is a lie!

Palomino horse ride on a beach. The only horses I saw in Mexico were starving. That's my guess?

Just so I will have company if I am wrong I will also guess that the Palomino on the beach is made up....even though it sounds like a cool thing to do. I have mostly seen donkeys on beaches in Mexico.

Your good - let's see - the victim of a crime. Sandie

I'll guess the victim of a crime, only because it said "ON SEVERAL OCCASIONS".

not sure about the go go dancer??

Those who selected the Palomino riding on the beach are correct. It was the lie.